Smiling alongside mercenaries in full combat gear, this is how Russian war propagandist Sergei Sreda marked a visit to Wagner’s Ukraine headquarters last week – saying they welcomed him ‘like family’ and told ‘funny stories’.

But Sreda actually condemned the men to death – giving away the base’s location in the occupied city of Popasna after inadvertently photographing a street sign that contained the address of a nearby bomb shelter.

That was all experts needed to locate the base, which Ukraine then used to launch a HIMARS strike. Confirmation that it had been struck came on Sunday, when Telegram channels with links to Wagner began posting photos of the aftermath – including soldiers being carried away on stretchers.

It is just the latest embarrassing blunder for Vladimir Putin’s forces almost six months into what was supposed to be a days-long war in Ukraine – having been forced to retreat from Kyiv, seen the Black Sea flagship Moskva sunk, withdrawn from Snake Island, and last week seen an airbase in Crimea all-but wiped off the map.

Sergei Sreda, a Russian war propagandist, visited Wagner’s HQ in Ukraine last week to pose with soldiers – but inadvertently revealed its location with this photo, which included a street sign with the address of a nearby bomb shelter (top left) 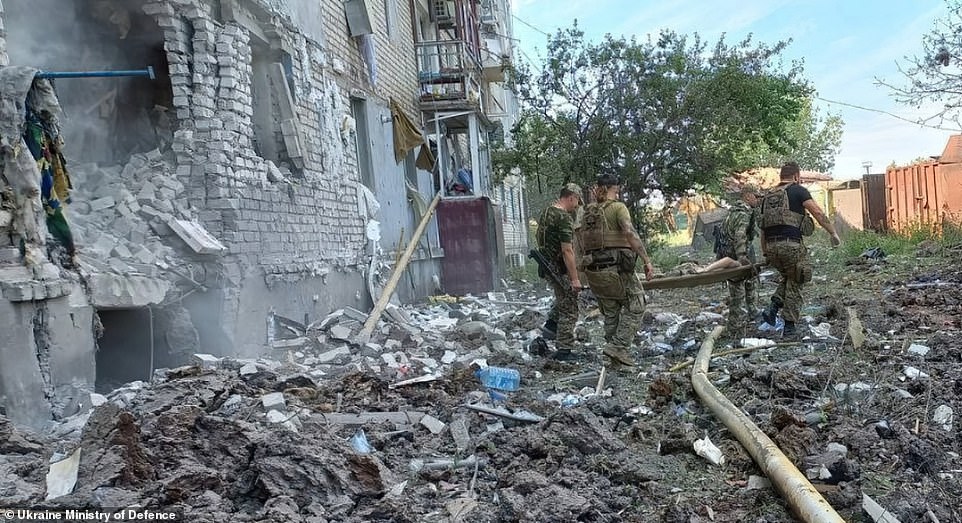 Ukraine said it used the information in that photo to launch a HIMARS attack on the base, with confirmation coming from Wagner-linked Telegram channels on Sunday that it had been hit (pictured, the aftermath of the strike) 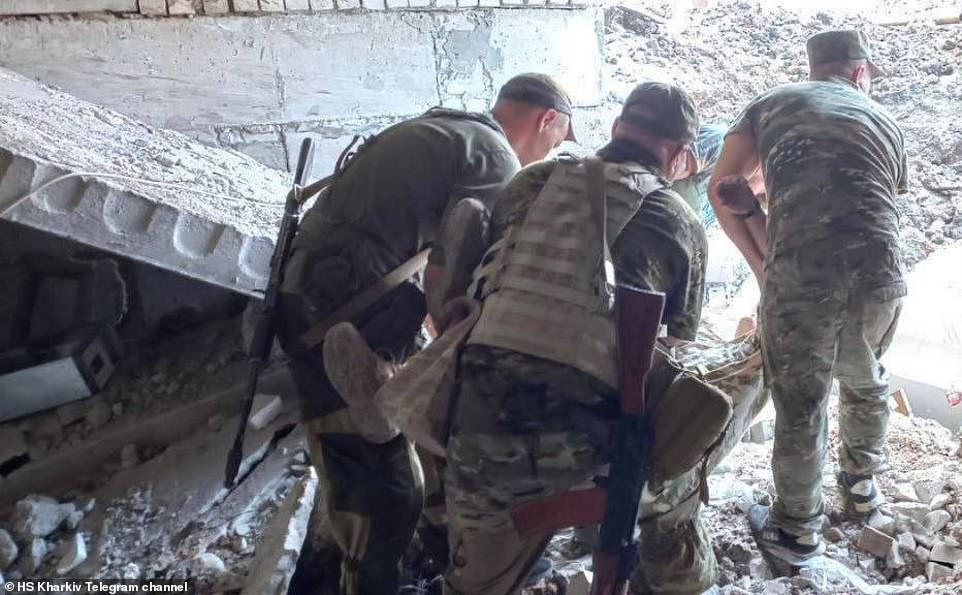 It is not clear how many mercenaries were killed or wounded in the strike, but images uploaded to Telegram accounts linked to the group show men being carried out on stretchers 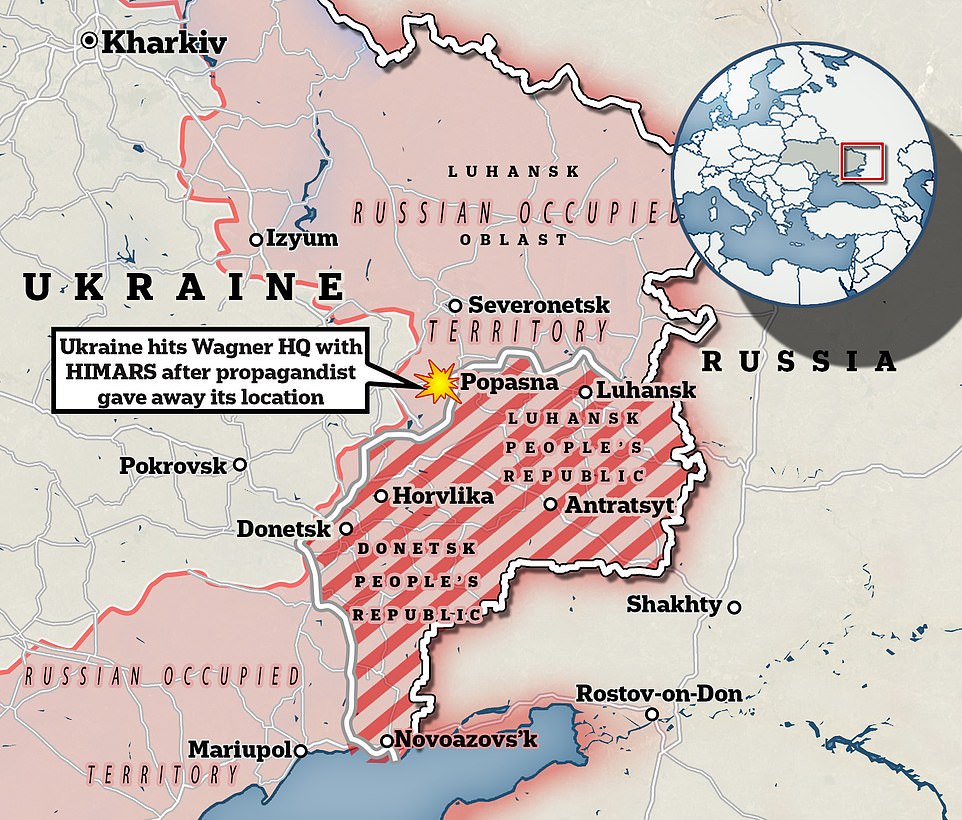 Popasna is located in Ukraine’s Donbas region and was captured by Russian forces back in May. It is thought Wagner troops led the fight, and have since adopted the city as their headquarters in Ukraine

Who are the Wagner Group?

The mercenary group is considered to be at the beck and call of Putin to carry out his dirty work.

The army-for-hire, allegedly run by oligarch Yevgeny Prigozhin – a close ally of the Russian president who is often dubbed ‘Putin’s chef’ – was flown into Ukraine in April and offered a huge sum for the mission.

Highly trained and brutally violent in equal measure, Wagner mercenaries have been charged with spearheading Russia’s advance in the Donbas.

The group is thought to have been responsible for the capture of Popasna, a key city in the Luhansk region, which fell to Russian forces back in May and appears to have been adopted as their headquarters in the country.

Gruesome images have since emerged showing the severed head and hands of a Ukrainian soldier impaled on a metal fence in the city – with Wagner blamed for it.

It follows a pattern of war crimes, rapes and torture that Wagner has been blamed for in war-zones stretching from Africa, to the Middle East and South America.

Its soldiers – often those deemed unfit to serve in Russia’s regular military or dismissed in disgrace – are parachuted into war zones where the presence of the Russian army would attract unwanted attention.

Amid heavy losses in Ukraine, Prigozhin is said to be personally recruiting new troops from Russian prisoners – offering murderers clemency in return for six months on the frontlines.

The Kremlin denied the group’s existence for years, but state media has acknowledged its presence in Ukraine.

Putin claims to know nothing about the group’s operations which allows him to effectively wash his hands of the atrocities they commit.

But, in reality, he is thought to be pulling the strings.

Sreda’s visit also seems to have coincided with a visit to the frontline by Yevgeny Prigozhin, an oligarch who owns Wagner and has been dubbed ‘Putin’s chef’ because he rose to prominence throwing lavish banquets for the Russian leader.

Another photo uploaded to his Telegram channel on August 8 – and since deleted – shows him shaking hands with a man who looks very like Prigozhin, as a rifle-carrying thug stands nearby.

Unconfirmed reports that have emerged on Telegram claim that Prigozhin has not been seen since seen the strike, and those who know him are in a ‘mild panic’.

However, there has been no official confirmation from either Russia or Ukraine that he was at the base when it was struck.

Wager is an army-for-hire whose existence was denied by the Kremlin for years, but is thought to be at the beck-and-call of Putin himself.

The group is used to fight wars on behalf of the Kremlin in areas of the world where direct Russian military involvement would draw unwanted attention.

Wager is believed to operate in Africa, the Middle East and South America, where allegations of war crimes, rape and torture by its troops are common.

Mercenaries are often recruited from the ranks of Russia’s regular military, often having been discharged for poor conduct.

Prigozhin is also thought to recruit from prisons, and is said to be in the middle of a hiring spree amid heavy casualties in Ukraine.

Murderers are allegedly being offered clemency from prison sentences provided they are willing to fight for six months on the frontlines.

Next, he was linked to pro-Putin troll factories pumping out supportive propaganda in Russia and the West, and to the Wagner private army which is active in Ukraine, Syria and Africa.

He disputes the link to Wagner, despite claims he has been seen personally recruiting prisoners – including convicted murderers – to fight in the war in Ukraine.

He reportedly told inmates: ‘I was jailed, too. Now I am a Hero of Russia. We need your skills.’

Putin last month awarded him Russia’s top honour. In Soviet times, he was jailed for robbery, fraud, and involving teenagers in crime.

‘He is alive, even swearing,’ a source from Popasna, not related to Wagner, told VCHK-OGPU Telegram channel. 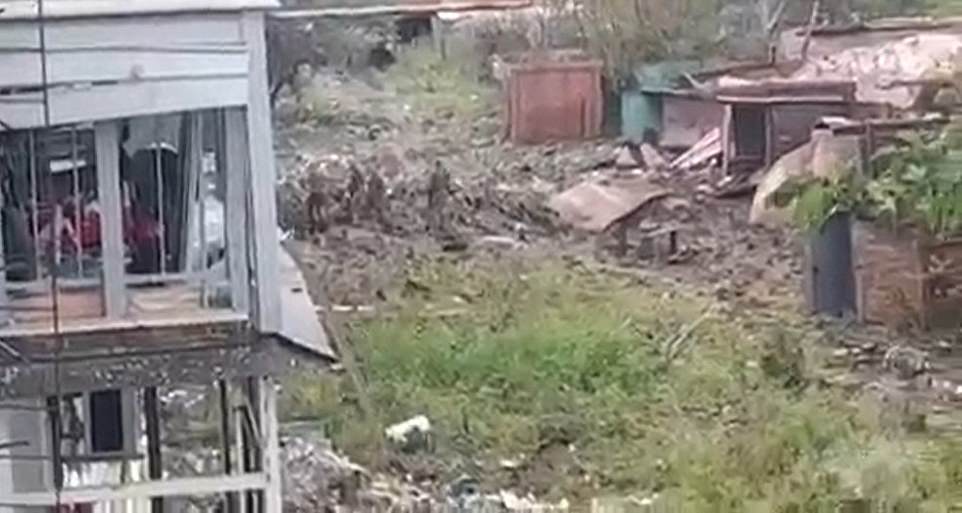 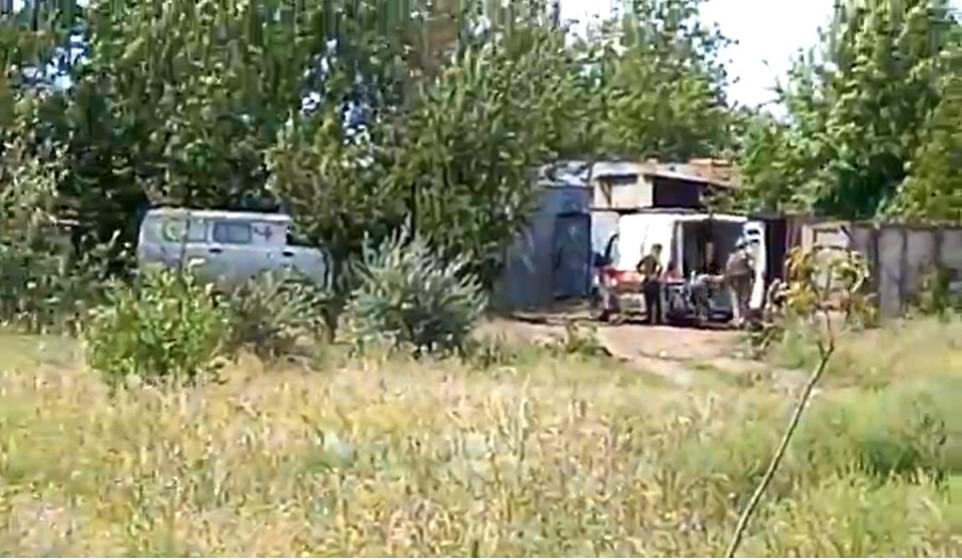 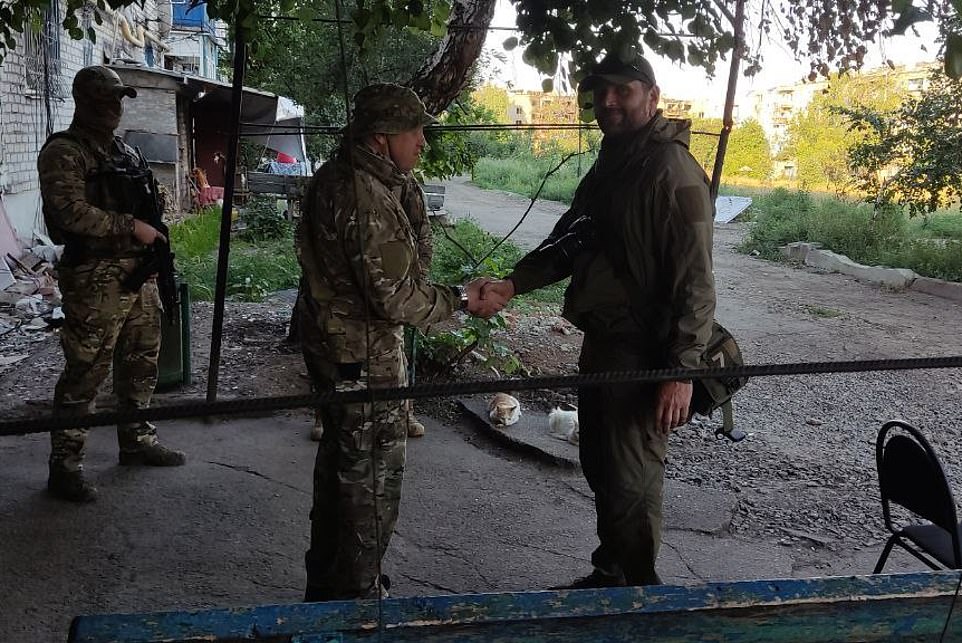 Sreda (right) also posted an image of himself shaking hands with a man who appears to be Yevgeny Prigozhin (left), a Russian oligarch who owns Wagner, at the base. It is not clear whether Prigozhin was still there when the rocket attack happened 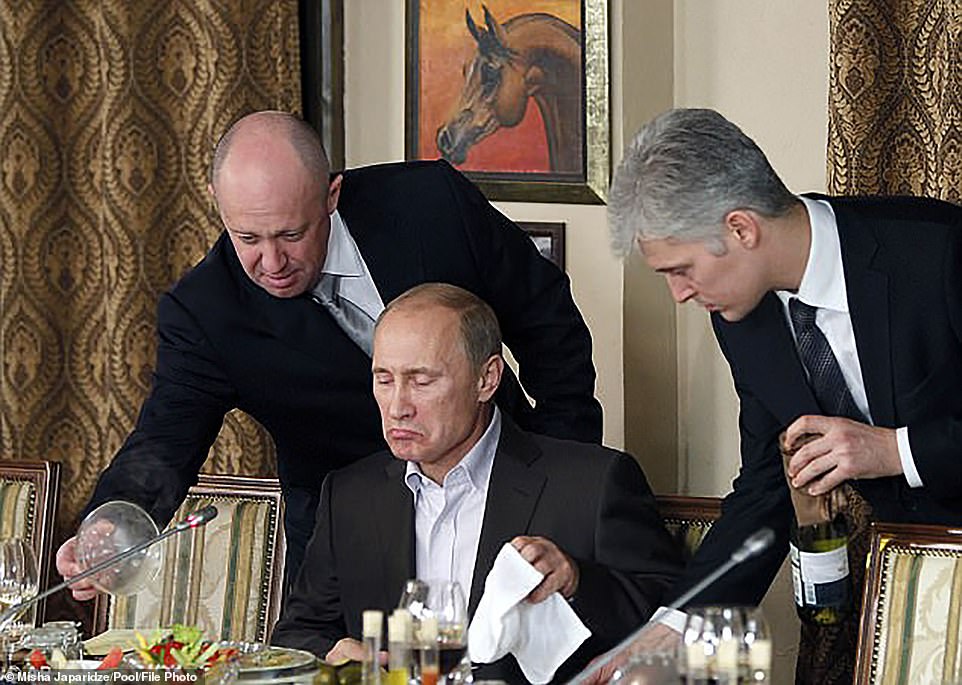 Prigozhin (left) is an oligarch who rose to prominence organising lavish functions for Vladimir Putin (centre), earning him the nickname ‘Putin’s chef’

Elsewhere in Ukraine today, Mykolaiv governor Vitaly Kim accused Russia of abandoning ‘stupid orc’ soldiers on the west bank of the Dnipro River near Kherson while withdrawing all its commanders to the east.

Ukraine has already blown up all three bridges under Russian control connecting the two banks, meaning its soldiers on the west side have no easy way of resupplying, reinforcing, or retreating as Kyiv’s men advance.

Kim, who runs a city on the west bank, said Monday that Russian commanders have now begun withdrawing – apparently fearing capture or death at the hands of the Ukrainians.

‘I feel just a bit sorry – but not much – for the stupid orcs who had been abandoned on the right bank of the Dnipro,’ he wrote on Telegram. ‘All of the commanders are moving to the other side.’

Meanwhile horrifying video emerged from the port city of Odesa – located around 90 miles along the Black Sea coast from Kherson – that showed two men being blown to bits by a floating mine.

Two more beachgoers were injured in the explosion at the Black Sea coastal town, according to Ukrainian media which shared the CCTV footage yesterday.

Odesa authorities have urged residents not to swim in the waters by the port city, which is littered with both Russian and Ukrainian explosives.

Footage shows a number of people on the shoreline when the huge blast sent water spraying upwards. According to Ukraine’s Pravda newspaper, two swimmers were killed instantly in the explosion. Two more were injured.

A city council spokesman said ‘a group of men’ had ‘ignored the announced restrictions on visiting the coast and swimming in coastal waters’.

It follows the detonation of another landmine at an Odesa beach in June, which killed a father in front of his horrified family.

The 50-year-old man from Donetsk was killed instantly after stepping on the mine. 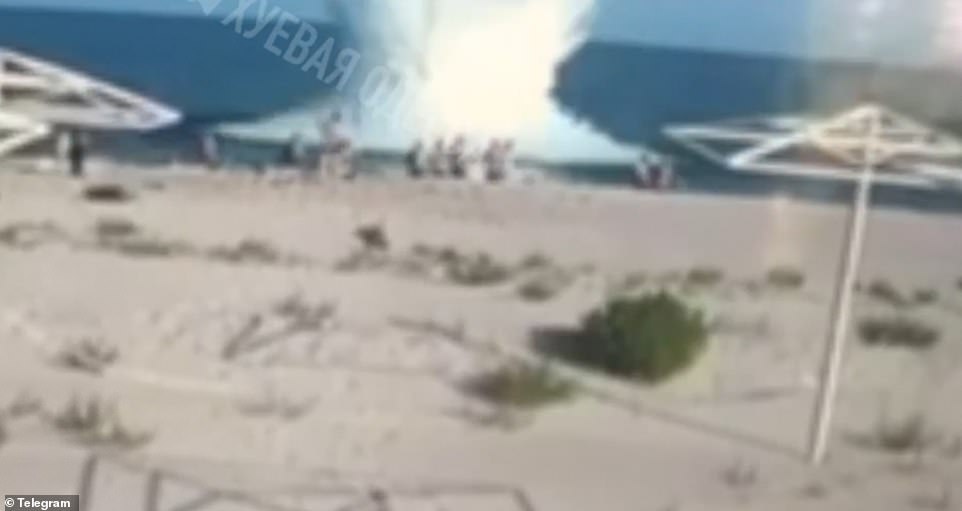 Two more beachgoers were injured in the explosion at the Black Sea coastal town, according to Ukrainian media which shared the CCTV footage yesterday

Russia is now almost six months into what was supposed to be a days-long war in Ukraine designed to topple the government, install a puppet regime, bring the country back under Moscow’s sway and challenge western order.

But Putin has failed to achieve any of those objectives – and is struggling even to reach his revised target of liberating the entirety of the Donbas region.

Moscow’s troops did manage to liberate the entirety of Luhansk – one of two region that together make up the Donbas – when they captured the cities of Severodonetsk and Lysychansk in late June and early July.

But the offensive has ground to a virtual halt since then. Though Russia continues to advance in pockets along the Donbas front, it has gained no significant ground in the last several weeks.

That is thought to be because American HIMARS launchers have devastated ammo dumps and command posts in the region, meaning Putin’s generals can no longer rely upon the massive artillery barrages that allowed them to advance in early summer.

America believes Russia has now lost around 75,000 men killed and wounded – about half the force Putin amassed before invading – and is struggling to recruit more men.

Wagner is said to be so desperate for recruits that Prigozhin is going in person into Russian jails looking for convicted murderers to draft into its ranks.

He is said to be offering them clemency from long prison sentences in return for spending six months fighting on the frontlines.

Conscription is also underway in occupied regions, but these troops are poorly trained and equipped and have been called ‘canon fodder’ by Ukrainian soldiers.

There is also increasing evidence that they are refusing to fight, with videos emerging showing units and their commanders asking to be sent back from the front.

Putin’s generals are now thought to be relying on two pontoon bridges to carry troops and equipment across, meaning forces on the west side have no easy way of reinforcing or retreating if they are attacked.

Kyiv’s men are now slowly advancing on the city from multiple directions, with the aim of re-taking it.

An attack by partisans in the southern city of Melitopol on Sunday reportedly took out a railway bridge linking it with Crimea, meaning Russian forces there are also without an easy supply route.

And Crimea itself came under attack last week when an airfield was blown up, destroying between ten and 20 Russian aircraft stationed there.

Using technology to power the future of banking