A student opened fire during a lecture at Heidelberg University in Germany today, killing a woman and injuring three others before shooting himself dead.

The 18-year-old shooter was a biology student at the university, said state police chief Siegfried Kollmar.

The suspect, a German citizen with no known criminal record, sent a phone message to his father shortly before the shooting, saying that “people will be punished,” Mr Kollmar told reporters.

The exact motive behind the attack is still under investigation, but the suspect is known to have had a history of mental illness, he added.

The unidentified teenager is believed to be carrying multiple rifles in a backpack as he rampaged in a university lecture hall in south-west Germany. 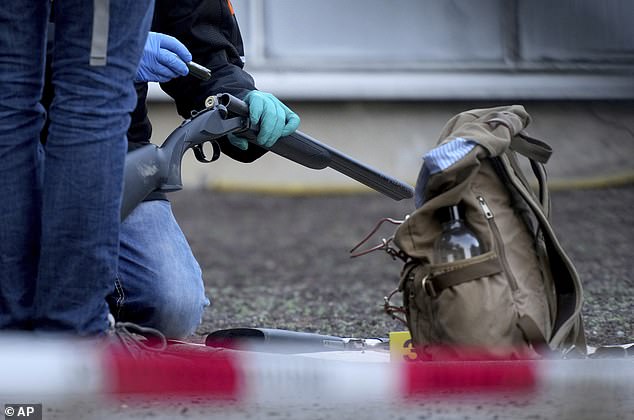 Specialized SEK commandos and police officers streamed through the Neuenheimer Feld, an area of ​​Heidelberg made up mostly of university buildings.

Images showed police examining a shotgun at the scene with a backpack and another gun on the ground in front of them.

Mr Kollmar said the gunman’s body was found outside by officers, along with two firearms he had recently acquired abroad and around 100 rounds of ammunition.

Police identified the woman killed as a 23-year-old German. The slightly injured are two German women and a German-Italian man.

Chancellor Olaf Scholz expressed his dismay at the shooting and offered his condolences to the families, victims and students.

“It was reported that a student died from her injuries,” he said. “It breaks my heart to hear such news.” 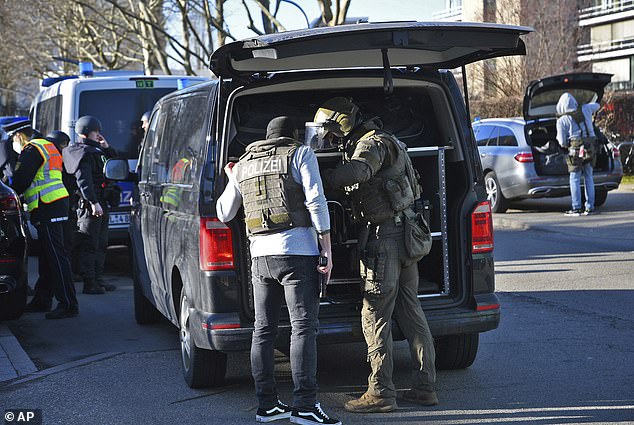 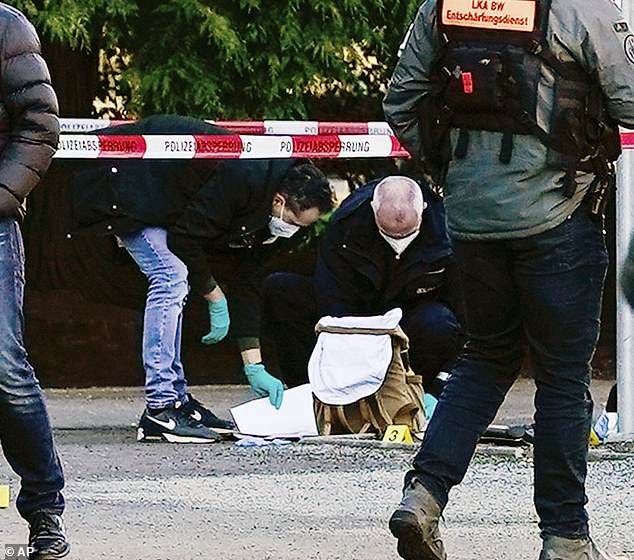 A statement from the Mannheim police department says: “Four people, some seriously injured, there is currently no longer any danger, the perpetrator is dead – it is assumed that the perpetrator was a loner.”

“The perpetrator himself is dead. The colleagues are still on site with strong forces – we will provide further information here!”

The police asked motorists to drive around Neuenheimer Feld so that rescue workers and emergency services can travel unhindered and respond to the shooting.

“We are incredibly shocked. This is a catastrophe that takes away everything possible between lectures, exams and everyday university life,” said the chairman of the university’s student body, Peter Abelmann, of the picture. 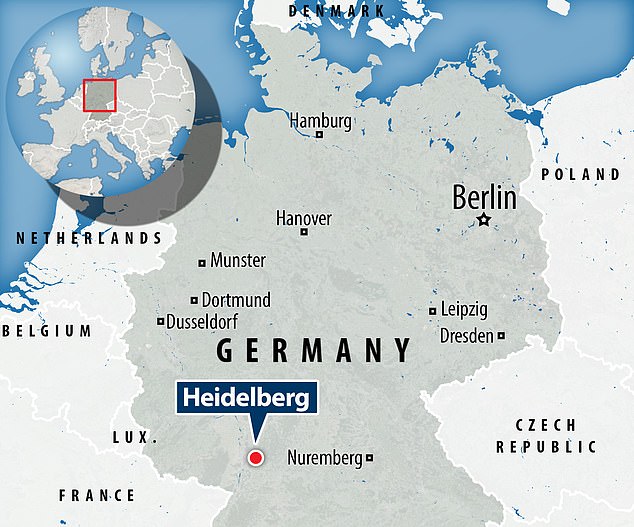 A man armed with a long-barreled gun shot dead several people at the university in Heidelberg, police said 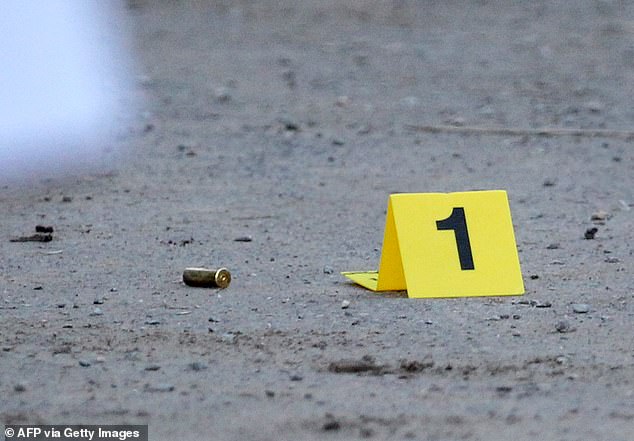 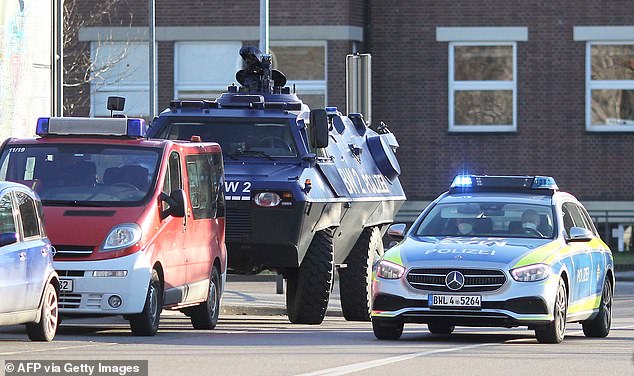 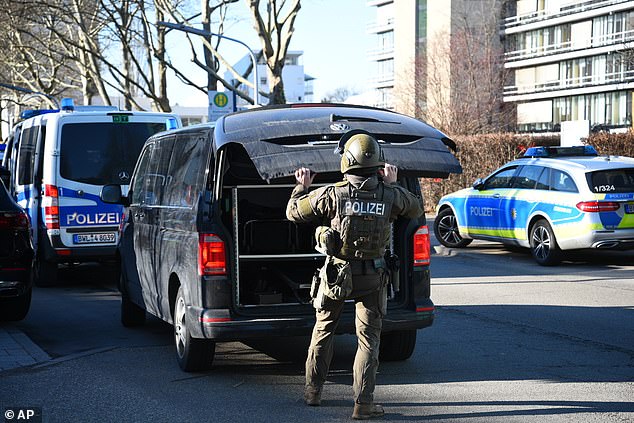 The press office of the University of Heidelberg did not want to give any details about the incident and referred all queries to the police.

Federal Justice Minister Marco Buschmann said his thoughts were with the victims as he thanked the emergency services for their efforts.

A history of the University of Heidelberg

Heidelberg University – also known as Ruperto Carola – was founded in 1386, making it Germany’s oldest university and one of the best known in the country.

In 1386, Elector Ruprecht I of the Palatinate received permission from the Pope to build the university in his residence city of Heidelberg.

In the 17th and 18th centuries, at a time of religious and political upheaval in Germany, the university suffered a loss of prestige.

But at the beginning of the 19th century, the University of Heidelberg was able to assert itself again and was not only celebrated for its high level of research, but also for its commitment to democratic ideals and liberality.

Heidelberg University, like other universities in Germany, supported Adolf Hitler when he came to power in 1933 and dismissed many of its staff and students on racial and political grounds.

After World War II, the university changed its views. In the mid-1960s, Heidelberg became a mass university, tripling its student body by 2021.

Its reputation has become world-famous, and 33 Nobel Prize winners come from the university.

Heidelberg is a picturesque university town in the state of Baden-Württemberg and home to around 160,000 inhabitants.

Founded in 1386, Heidelberg University is the oldest university in Germany and one of the most renowned in Europe.

The university’s Neuenheimer Feld campus on the northern bank of the Neckar is home to natural science faculties and part of the university hospital, as well as a botanical garden.

Students were urged to stay off campus in an email from the university when news of the shooting broke, local broadcaster SWR reported.

The university only resumed face-to-face classes in October after months of distance learning because of the coronavirus pandemic.

Students must prove that they have been vaccinated against Covid, have recovered or have a current negative test if they want to enter university buildings.

Germany has been hit by a spate of attacks in recent years, most of which were carried out by jihadists or far-right militants.

However, school shootings are relatively rare in Germany, a country with some of the strictest gun laws in Europe.

In 2009, a former student killed nine students, three teachers and three passers-by in a school shooting in Winnenden, also in Baden-Württemberg. The shooter then killed himself.

In 2002, a 19-year-old former student, apparently in revenge for his expulsion, shot dead 16 people, including 12 teachers and two students, at a school in Erfurt, central Germany. He then killed himself too.

Both massacres were committed with legal guns, prompting Germany to tighten its gun laws.

The country currently requires anyone under the age of 25 to pass a psychiatric evaluation before applying for a gun license.

In another incident in 2016, nine people were killed when gunman David Ali Sonboly rioted in a shopping center in Munich.

The shooting sparked renewed debate over whether Germany should further restrict gun ownership.

A new era for data: What’s possible with as-a-service