Russia is massing nuclear-capable missiles along with 30,000 troops in Belarus, NATO has warned, amid fears of a huge refugee crisis if Ukraine is invaded.

Jens Stoltenberg, NATO general secretary, said today that Russia has already deployed thousands of troops including Spetsnaz special forces, along with Iskander missiles that can be tipped with nukes, fighter jets, and S-400 anti-aircraft systems.

Intelligence suggests that Putin will grow that force to 30,000 troops within the coming days, Stoltenberg added, saying it represents the largest Russian deployment in Belarus since the Cold War.

Observers are particularly fearful of troops stationed in Belarus because it gives them the shortest route to attack Kiev, Ukraine’s capital – with some predicting that military drills taking place in the coming days could be used as cover for an attack.

Stoltenberg issued his warning as the Norwegian Refugee Council predicted a huge humanitarian crisis if violence breaks out across the region.

Russian tanks take part in combat drills in Belarus on Wednesday, ahead of much larger drills set to take place next week 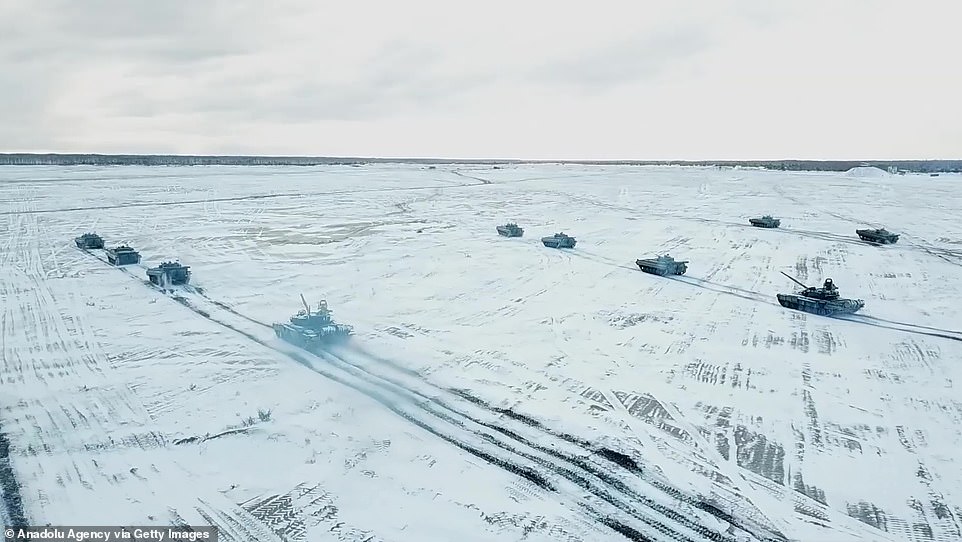 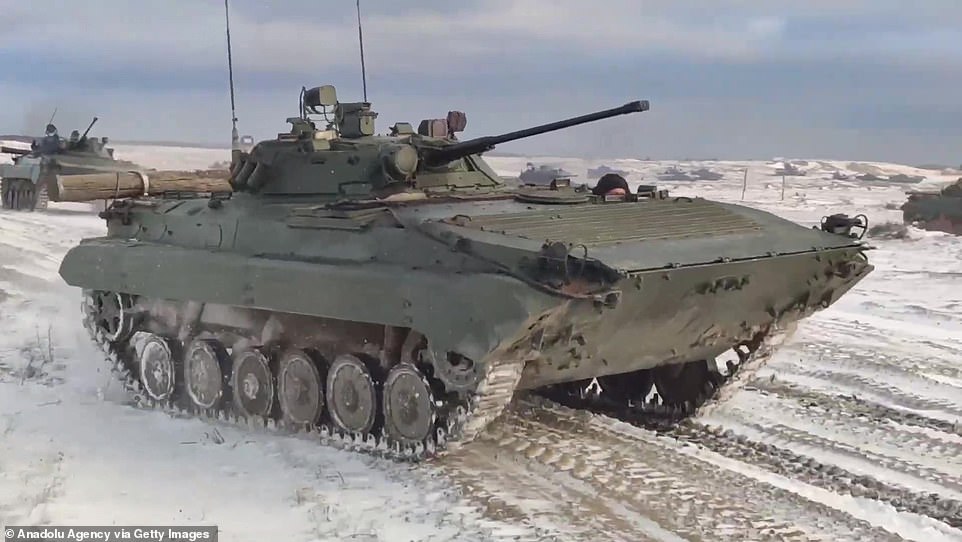 Russian armoured personnel carriers take part in drills in Belarus on Wednesday, amid fears the exercises could provide cover for an invasion 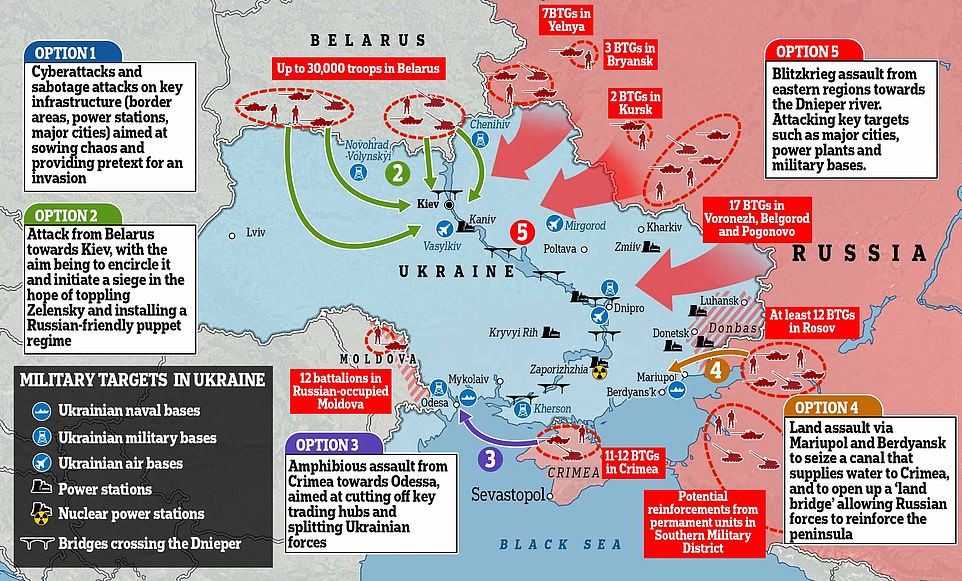 A map showing where Putin’s forces have assembled on Ukraine’s borders, the military options Putin might be considering, and key targets he would likely go after in the event he chooses to invade – something the US continues to war could be just weeks away from happening

‘The lives and safety of millions of people in eastern Ukraine hang in the balance as we wait for a political breakthrough to the current impasse,’ Jan Egeland, head of the council, said in a statement after visiting Ukraine.

‘We must not underestimate the human suffering of renewed conflict – it would result in increased civilian casualties, massive displacement and humanitarian needs.’

Egeland said fighting in the eastern Donbass region has already displaced some 850,000 and left 3million reliant on humanitarian aid.

And he predicted another 2million people would be made homeless if Russia were to attack other eastern regions – not including the possibility of an attack from Belarus.

Amid the East-West standoff, Britain on Thursday launched fighter jets against aircraft approaching its area of interest, a day after the Royal Air Force intercepted and escorted away four Russian bomber in a similar operation.

‘Quick Reaction Alert Typhoon fighters from RAF Lossiemouth, supported by a Voyager Tanker from RAF Brize Norton, have been launched against aircraft approaching the UK area of interest,’ an RAF spokesman said.

While the identity of the approaching aircraft was not immediately confirmed, it comes just a day after RAF jets were sent to escort two Russian Cold War-era Tu-95 Bear H and two Tu-142 Bear Fs.

The Quick Reaction Force ‘intercepted and escorted’ the four Russian aircraft and escorted them away from UK airspace, the RAF said. The Russian bombers did not enter UK sovereign airspace. 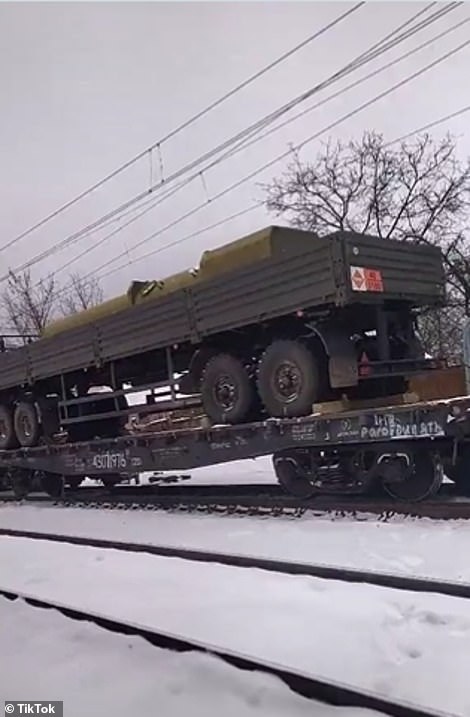 Russian Iskander missiles, which can be tipped with nukes, are pictured arriving in Belarus last week

Analysts have warned for weeks that Russia is in the process of significantly expanding its arsenal in Belarus, which comes after dictator Lukashenko pivoted into a close alliance with Russia after relations with the EU dramatically collapsed.

The strongman leader, often called Europe’s last dictator, hit out at the EU after it criticised his most-recent election ‘win’ in 2020 which was widely viewed as rigged – then cut almost all ties after he hijacked a Ryanair plane to arrest a journalist.

Since then, Lukashenko has drawn markedly close to Russia – backing Putin’s menacing of Ukraine, having been largely dismissive of Putin’s expansionism when he annexed Crimea in 2014.

In recent weeks, Lukashenko has offered Putin use of a Belarussian training base near Poland and Lithuania – both NATO states – the use of four airbases, a missile base, and storage sites, and has offered to host Russian nuclear weapons.

The pair will also hold a major military drill on Ukraine’s border to test the combat readiness of their troops in the coming days.

Russia has massed some 130,000 troops backed by tanks and artillery on Ukraine’s border, a build-up that began in November last year but continues to grow as Washington warns invasion could be ‘imminent’.

High-level diplomacy is now underway after the Kremlin has issued a list of security demands to NATO and the US, including that Ukraine be banned from the alliance and all forces be withdrawn from ex-Soviet states.

Most of Moscow’s demands have been dismissed as non-starters, but Western allies have proposed renegotiating missile agreements, increasing the transparency of military drills, and giving Russian inspectors access to NATO bases as a compromise.

But they also warned Putin that failure to withdraw his troops from Ukraine’s border will result in NATO sending extra troops to the region to counter-balance them, a move that Biden made good on as he deployed an extra 2,000 troops to Europe.

Around 1,700 of those will be heading to Poland, NATO’s closest deployment to eastern Europe, while 300 will go to Germany to join command positions there. 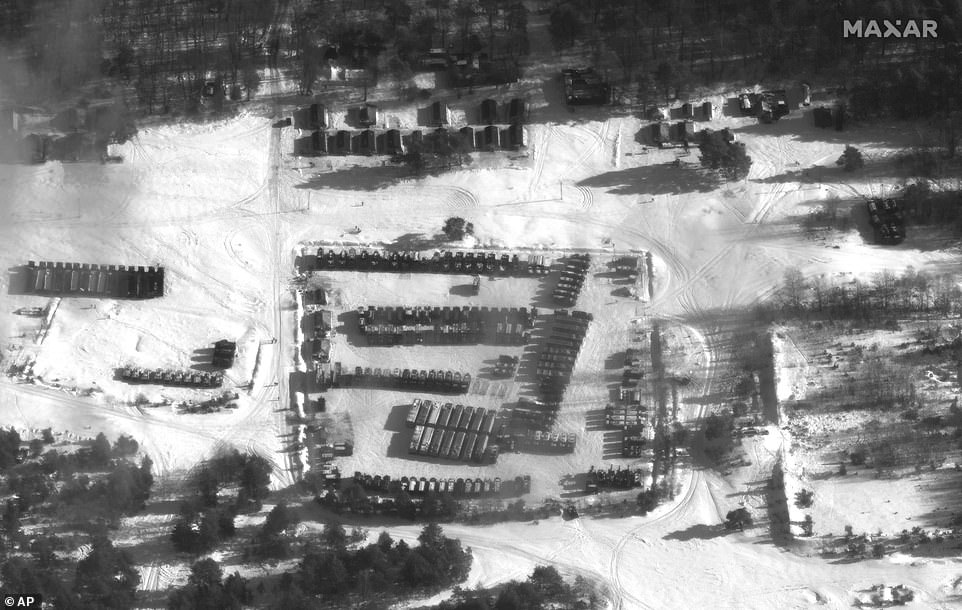 Russian Iskander missiles are pictured on a military base in western Belarus, close to the border with Ukraine, on January 30 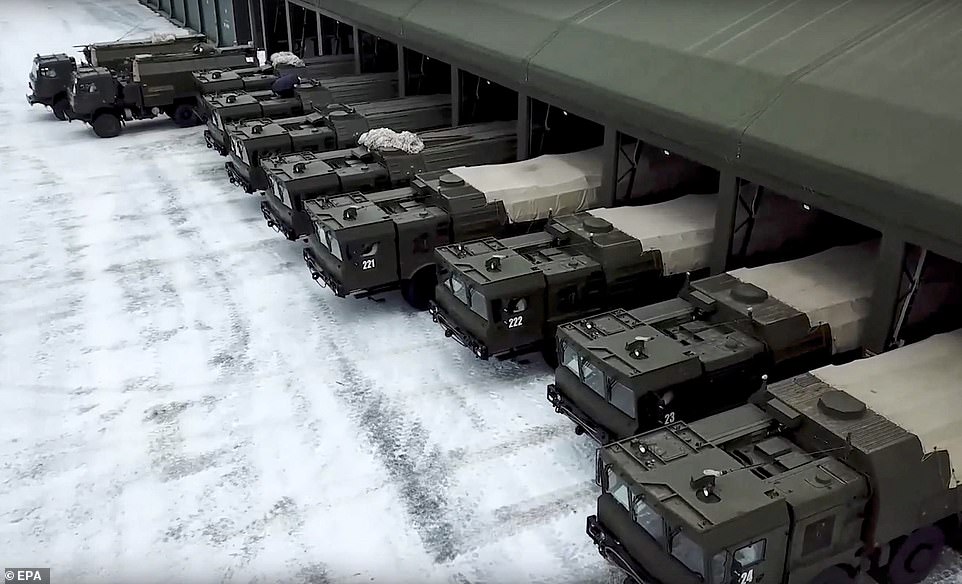 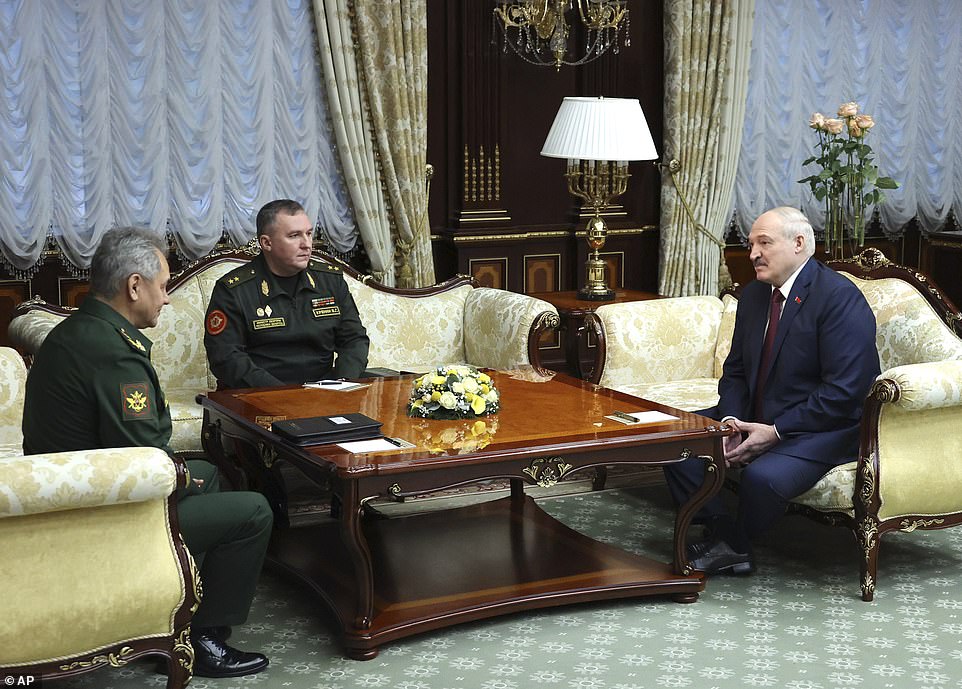 Another 1,000 troops already in Europe will be repositioned to Romania, which borders the Black Sea where one of Russia’s biggest fleets is positioned.

Putin and his inner circle are still mulling over NATO and America’s diplomatic proposals, but in public have sharply rebuked Western allies for ignoring their concerns. Russia has also shown no signs of withdrawing forces from near Ukraine.

He added that it would ‘delight’ the Ukrainian authorities, who would continue sabotaging ceasefire agreements aimed at ending fighting in the east of the country ‘with impunity’.

Dmitry Peskov, Putin’s spokesman, also hit out at the troop movements on Thursday, accusing the US of escalating tensions in the region.

‘Unfortunately, Americans are continuing to do it,’ he said. ‘Obviously, these are not the steps aimed at de-escalating tensions, on the contrary, these are actions that lead to an increase in tensions.’

‘Any measures taken by Russia to ensure its own security and interests are also within reason,’ the Kremlin spokesman added.

Amid the standoff, Boris Johnson finally spoke with Putin over the phone late Thursday to warn him that any invasion of Ukraine would be a ‘tragic miscalculation’.

Having abandoned a call earlier in the week to deal with the fallout of the ‘Partygate’ scandal, Mr Johnson told Putin he is ‘deeply concerned’ about Russian aggression in eastern Europe and that the UK will not back down over Ukraine’s right to join NATO.

Put is said to have dug his heels in during the call, giving no indication that he plans to withdraw forces from the region.

A Kremlin summary of the call simply said: ‘The unwillingness of NATO to adequately respond to the well-founded Russian concerns was noted.’

Ukraine’s Foreign Minister Dmytro Kuleba again played down fears of a Russian attack in a call with reporters but said that if Russia makes moves that could signal an imminent invasion Ukraine would react as necessary. 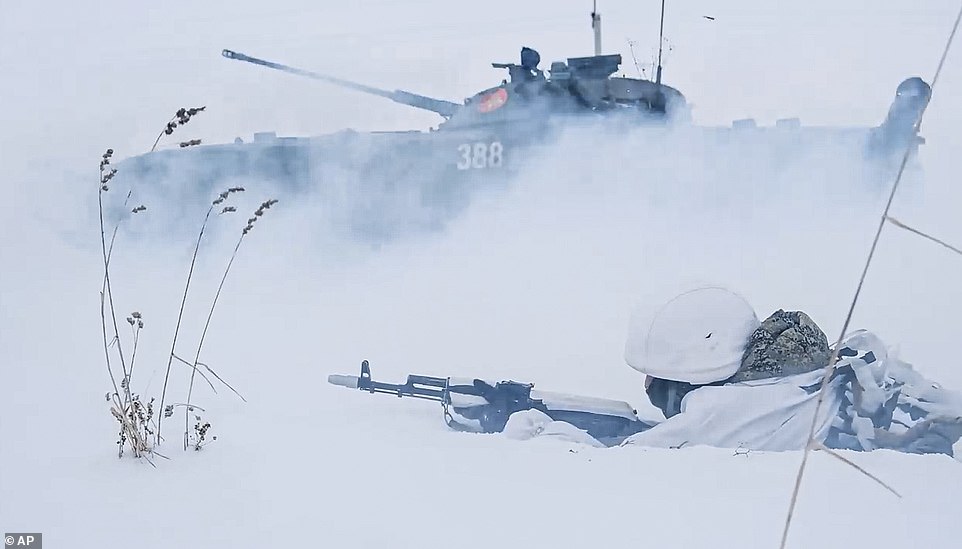 Russian soldiers attend a military training at the Yurginsky training ground in the Kemerovo region, Russia 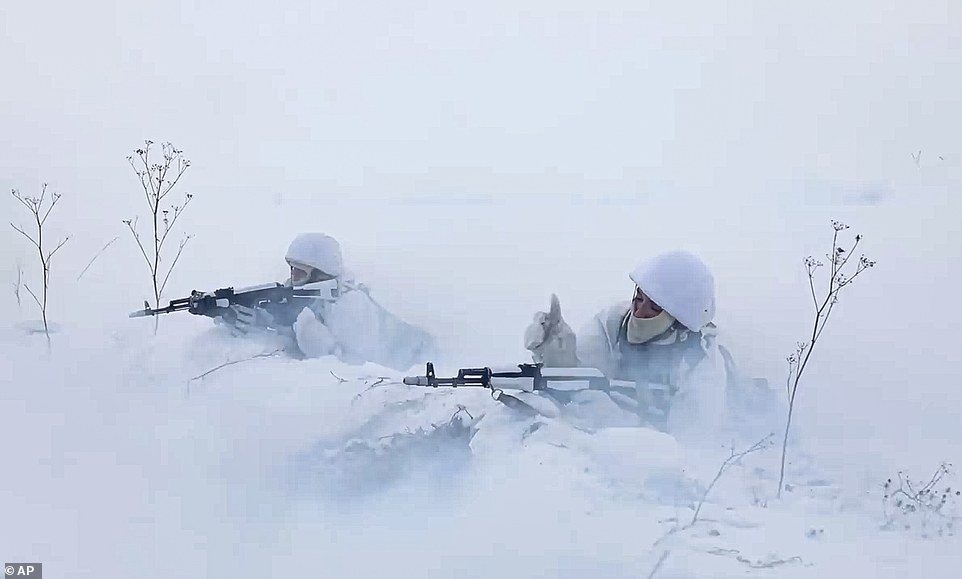 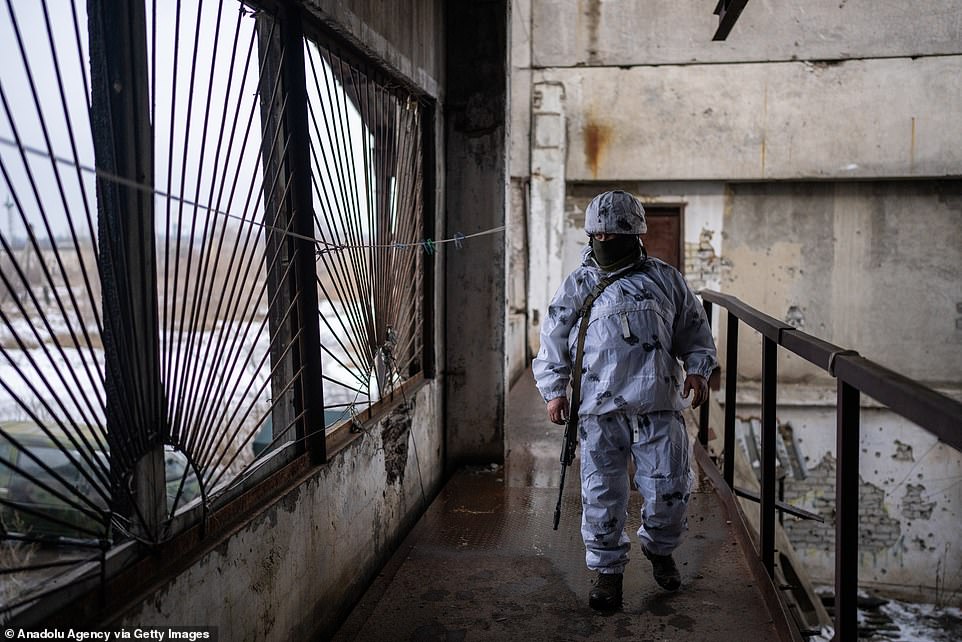 A Ukrainian soldier keeps guard at a building outside of Maryinka, Ukraine 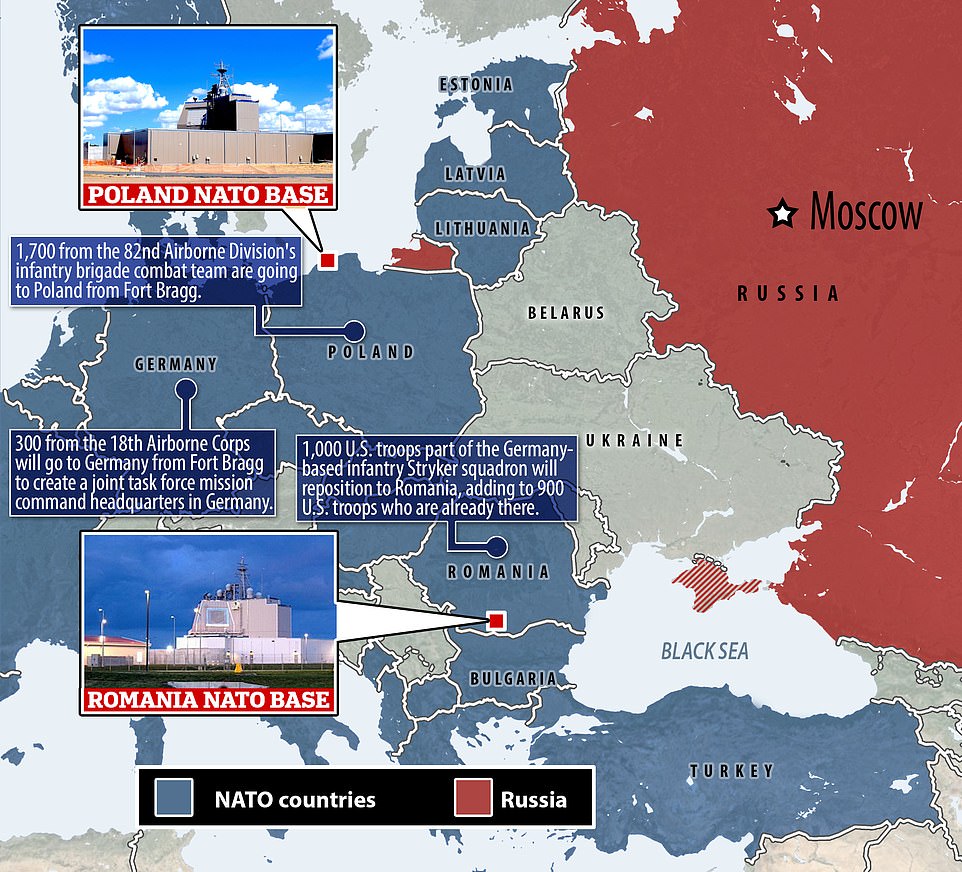 Poland’s Defense Minister Mariusz Blaszczak wrote on Twitter that the U.S. deployment to his country is ‘a strong signal of solidarity in response to the situation in Ukraine.’

President Biden put 8,500 troops on heightened alert last month in preparation for movement to Eastern Europe to help bolster the region against threats from Russia should NATO activate its response force.

The U.S. already has several thousand troops in Poland, and Romania is host to a NATO missile defense system that Russia considers a threat to its security. Biden notably has not sent American military reinforcements to the three Baltic countries on NATO’s eastern flank – Estonia, Latvia and Lithuania – that are former states of the Soviet Union.

Tensions have been further aggravated by plans for joint military exercises between Russia and neighboring Belarus, where Washington claims Moscow is preparing to send 30,000 troops.

During Putin’s phone call with Mr Johnson, the Russian President said NATO was ‘hiding behind’ its open-door policy that ‘contradicts the fundamental principle of the indivisibility of security’, the Kremlin said in a statement.

It added that Putin accused Ukraine of the ‘chronic sabotage’ of the Minsk peace agreements signed in 2015 between Kyiv and pro-Russia separatists in eastern Ukraine.

Since the start of the conflict, which has left 13,000 dead, the West has accused Russia of supplying military and financial help to the separatists, charges that Moscow rejects.

Mr Johnson tweeted: ‘I spoke to President Putin this afternoon to express my deep concern about Russia’s hostile activity on the Ukrainian border.

‘Any further incursion into Ukrainian territory would be a tragic miscalculation.

‘Dialogue and diplomacy is the only way forward.’

Still crazy about each other: Jennifer Lopez and Ben Affleck on a romantic date