The ten-month-old son of rugby legend Jannie du Plessis drowned in the family pool at the home of the South African world champions.

The tragedy occurred on the Springbok star’s 39th birthday, just two days after the child Jan Nathaniel was baptized on Sunday, a family friend revealed.

Du Plessis and his wife Ronel have two other children, daughters Rosalie and Hele, and live in a family home in Krugersdorp, a mining town west of Johannesburg.

The 10-month-old died Tuesday evening at the Du Plessis family home after falling into the swimming pool, police said, adding officials are investigating the drowning.

Du Plessis played 70 test matches for the Springboks until 2015 and was part of South Africa’s 2007 World Cup winning team. 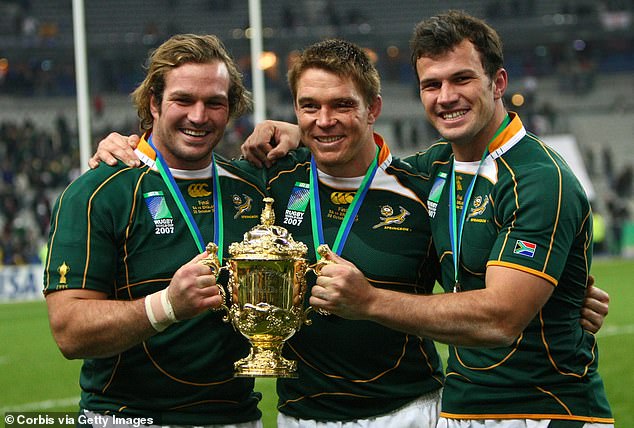 Jannie du Plessis played 70 times for South Africa and was part of the 2007 World Cup winning squad (pictured on the left with the trophy).

Police captain Raymond Sebonyane said in a statement: “On November 16, around 1900, the police were called to a drowning scene in which a 10-month-old boy fell into the swimming pool.”

The property is in Kenmare, a quiet suburb about 25 miles from Emirates Airline Park, formerly known as Ellis Park Stadium, and the base of du Plessis’ current club, the Lions.

The statement added: “Police are calling on parents or guardians of younger children to be more careful when children are playing closer to a hazard.

“Those with swimming pools should fence them off or cover them with safety nets when they are not in use.”

Former Springbok colleague and Lions CEO Rudolf Straeuli said todaySport24: “We as a Lions family are not doing well. I can confirm that this tragedy took place. We are all devastated. ‘

He later added, “As I am sure anyone can understand, Jannie and his family must now be left alone to deal with this tragedy.

“We offer him our full support and ask everyone to keep it in thoughts and prayers.” 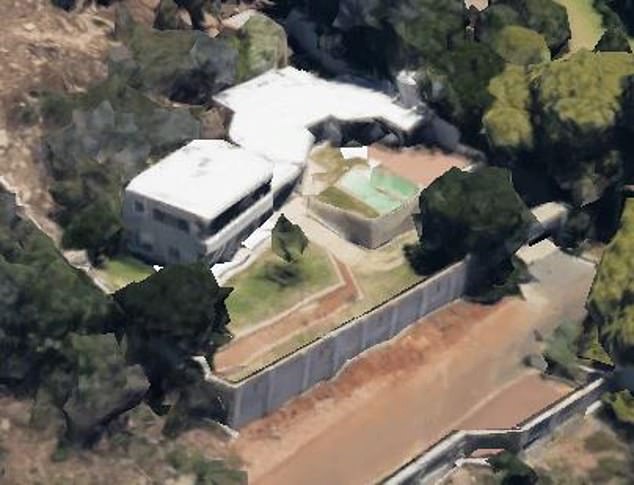 The 10-month-old died Tuesday evening in the Du Plessis family home after falling into the swimming pool (pictured), police said 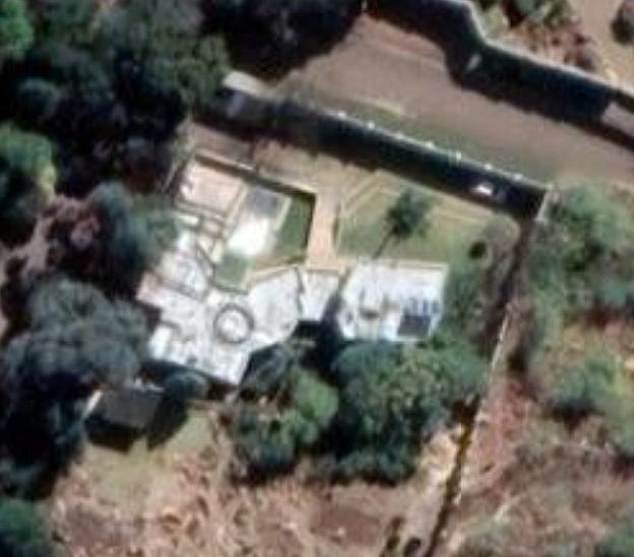 The property (pictured from above) is in Kenmare, a quiet suburb about 25 miles from the Lions Club Base in Emirates Airline Park, formerly known as Ellis Park Stadium

Springboks player Duane Vermeulen, a Du Plessis team-mate between 2012 and 2015, said on behalf of the South African team: “We really want to express our condolences to them. We understand that this is an extremely difficult time.”

He said the UK squad preparing for a weekend game against England had been briefed on the tragedy yesterday.

“As a family, we will think of them all the time,” he said. “We will stand by them and give them the best possible support as individuals.”

Vermeulen added that the squad hadn’t talked about paying special tribute to Du Plessis and his family, but said it was unlikely during the weekend’s game.

“If we have to, we’ll consult and do something for Jannie, but next weekend it’s about the game. We can always do something special for her later. ‘

The former Du Plessis club, the Sharks, expressed their “deepest condolences to the tragic loss of their young son” to Jannie, Ronel and the entire du Plessis family.

A spokesman for the club said, “Our thoughts and prayers are with you at this difficult time.”

Tendai ‘Beast’ Mtawarira, who played with Du Plessis in the winning squad of the 2007 Rugby World Cup, quoted a tweet from the Sharks franchise and expressed his sadness over the incident.

He wrote: “My heart is broken for the Du Plessis family …”

Meanwhile, SA Rugby Legends said: “Our righteous thoughts, prayers and condolences go to Jannie and Ronel du Plessis on the tragic loss of their beloved son. We are heartbroken for you. ‘

MyPlayers, the organization for all professional rugby players in South Africa, tweeted: “There are no words to describe the excruciating pain parents endure when they lose a child. Jannie and Ronel, our hearts and prayers are with you. ‘ 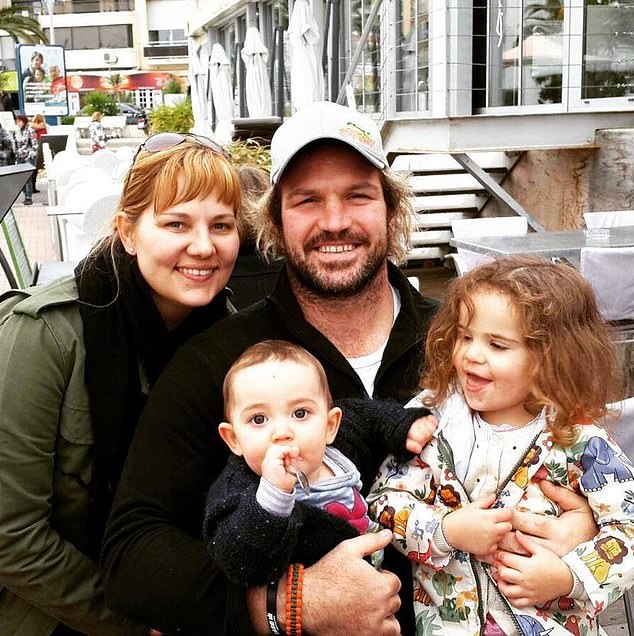 The narrow-minded prop master, a qualified doctor, played alongside his younger brother Bismarck in the 2007 World Cup. Du Plessis moved to Gauteng to join the Lions last year after having worked for the French Club of Montpellier for five years.

Growing up on a farm called Stirling outside Bethlehem, where his wife and children lived during the pandemic, the Springboks star has described his childhood as “isolated” but “carefree”.

“I remember the cold winters and the temperate summers. Life on the farm has its own charm, ”he told Food For Mzansi. The family has cattle and sheep and grows sweet beans and corn.

His father Francois played for the local club and encouraged the boys to get involved in the sport. “If we behave we could go to him” [team] Practice lessons on Tuesday and Thursday evenings. ‘

Du Plessis and his young family returned to the Bethlehem farm during the pandemic, saying they “played barefoot with the children on the farm, rode horses and kicked balls”.

The prop master said he hoped “one day” to be proud of my livestock and farm business. “In my heart of hearts, I’ve always been a farm boy. I can’t wait to start farming all day after my rugby career. “

Du Plessis is a qualified doctor and has said in the past that studying always came before rugby for his family. He studied medicine at the University of the Free State in Bloemfontein, although he was lured by a contract with the Pumas Rugby Union in 2003.

Du Plessis used his medical skills in 2009 when Brumbies player Shawn McKay was hit by a car in Durban.

The Springboks player stabilized McKay and helped him breathe until the paramedics arrived, although he died of his injuries a few days later. 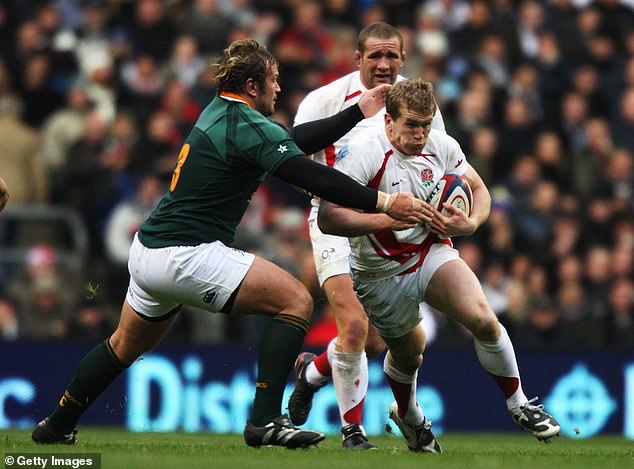 Matt Gaetz Wants To Hire Kyle Rittenhouse As His "Intern"