This is the heart-stopping moment RAF Typhoon jets intercepted Russian nuclear bombers over the north sea.

British troops were deployed at the Polish border amid a Kremlin-backed migrant crisis as the Typhoons were scrambled from Lossiemouth, Scotland, and Coningsby, Lincolnshire, along with a refuelling jet from Brize Norton, Oxfordshire, on Friday.

The Kremlin warplanes approached Dutch airspace before being intercepted by the RAF and were seen heading north into international airspace over the North Sea at around 12.45pm, according to Mil Radar.

The incursion comes with Europe at battle stations: Vladimir Putin is backing a ‘hybrid war’ using migrants to sow chaos at Poland’s border while sending tens of thousands of troops to the frontier with Ukraine for a possible invasion.

British troops were deployed at the Polish border amid a Kremlin-backed migrant crisis as the Typhoons were scrambled (pictured) from Lossiemouth, Scotland, and Coningsby, Lincolnshire, along with a refuelling jet from Brize Norton, Oxfordshire, on Friday 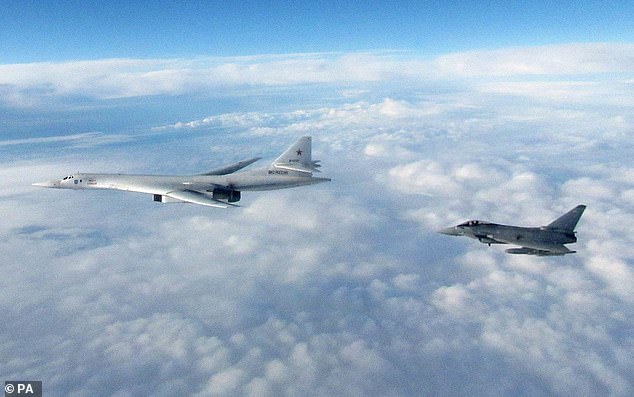 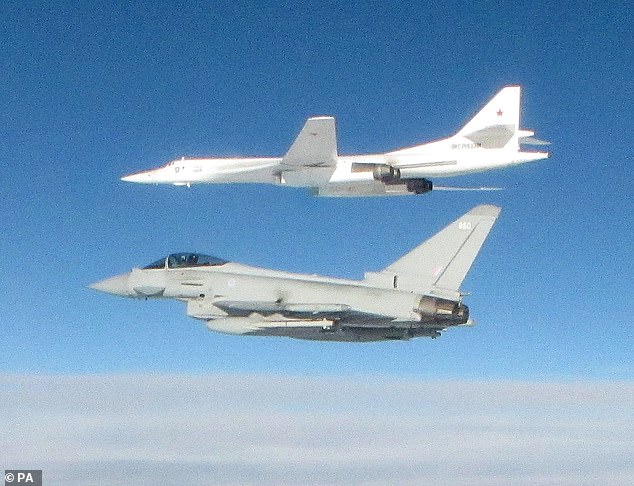 The Kremlin warplanes approached Dutch airspace before being intercepted by the RAF and were seen heading north into international airspace over the North Sea at around 12.45pm, according to Mil Radar

British Royal Engineers were today deployed along the Polish frontier with Belarus to carry out ‘reconnaissance’ with their NATO allies.

That move came just hours after Russian soldiers parachuted from the sky in snap drills, just 30 miles from the migrant encampment.

Poland’s defence minister, Mariusz Blaszczak, said: ‘[Polish and British] soldiers will co-operate in strengthening the fence of the Polish-Belarusian border.’

The MoD added: ‘A small team of UK Armed Forces personnel have deployed following an agreement with the Polish Government to explore how we can provide engineering support to address the ongoing situation at the Belarus border.’

Russian nuclear bombers were also flying over Belarus for a third day running as Putin remained firmly behind Belarusian President Alexander Lukashenko who is accused of ‘weponising migrants’ by the West.

Thousands of desperate refugees from the Middle East and North Africa have been ferried to the Belarus-Poland border this week by Lukashenko’s security forces, prompting Poland to deploy 15,000 troops along the line.

Separately, Washington warned its European allies that Putin could be preparing for an invasion of Ukraine’s eastern borders – hundreds of miles from where the migrant crisis is playing out – after satellites spotted troops, tanks and artillery pieces massing there. 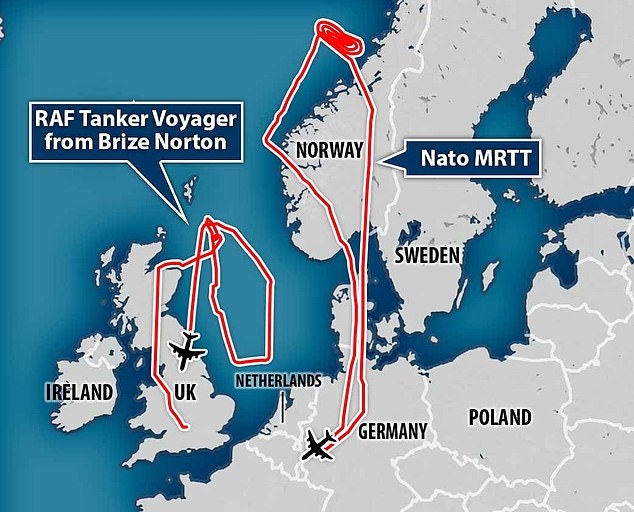 Flight tracking data was available for the RAF Tanker Voyager which left Brize Norton to support the Typhoons. A NATO jet also left Cologne to circle around Norway. The two Russian Tu-160 bombers flew over the North Sea before heading back north into international airspace 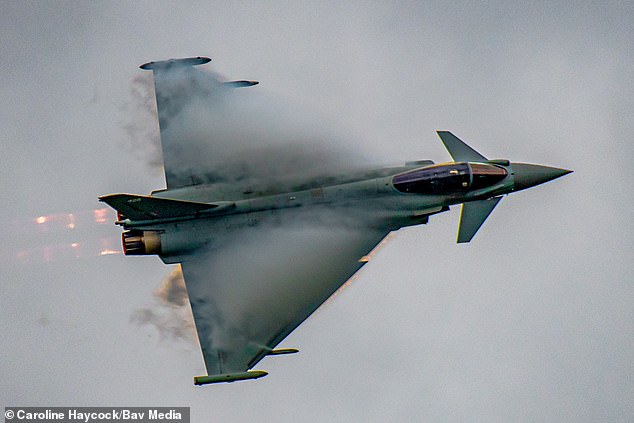 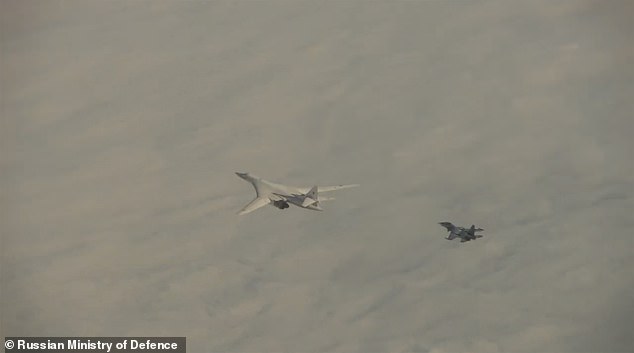 A Russian Tu-160 (the closer jet) over Belarusian airspace today 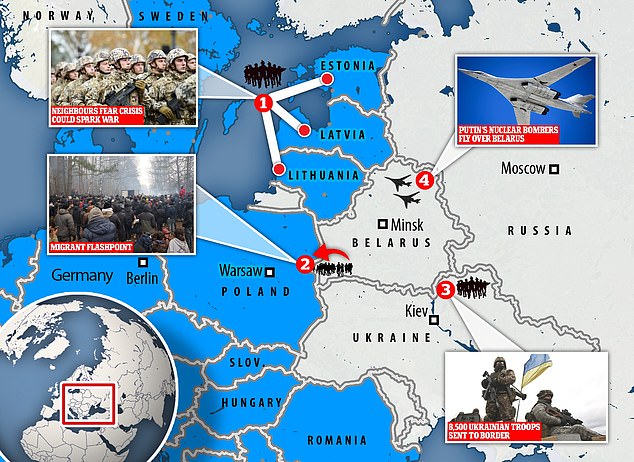 Fears are growing of an imminent conflict in eastern Europe as Russia and Belarus carry out snap military drills close to where a migrant crisis is playing out on Poland’s border, while Washington warns Putin is preparing to invade eastern Ukraine

Ukraine – which has been fighting a proxy-war against Russian-backed separatists in its eastern regions for years – has moved 8,500 more troops to the region in response.

Addressing the crisis today, Kremlin spokesman Dmitry Peskov denounced what he called ‘increased provocations’ against Russia, saying his country ‘can’t stay indifferent to that; we must be on our guard.’

‘We take measures to ensure our security when opponents take defiant action near our borders,’ Peskov added.

Meanwhile Sergei Shoigu, Russia’s defence minister, warned his French counterparts that the military situation in Europe ‘continues to deteriorate’ while slamming NATO for ‘building up its military presence’ near Russia’s border.

Speaking after a meeting with French officials in Paris, Shoigu insisted that Russia is working to ‘increase predictability and reduce the risk of incidents’ in the border region.

‘It’s a test of our collective resolve. If we are not resolute in our support for Poland and Ukraine then authoritarianism wins and we invite further destabilising adventurism.’

NATO said on Friday it is looking out for any escalation in the situation on its members’ borders with Belarus, after Belarusian and Russian paratroopers staged joint drills near the Polish and Lithuanian borders.

‘We will remain vigilant against the risk of further escalation and provocation by Belarus at its borders with Poland, Lithuania, and Latvia, and will continue to monitor the implications for the security of the alliance,’ the North Atlantic Council, representing the alliance’s member states, said in a statement.

‘NATO allies call on Belarus to cease these actions, to respect human rights and fundamental freedoms, and to abide by international law.’

American intelligence sources briefed their European counterparts of a possible Kremlin military operation in Ukraine’s east to annex territory similar to the 2014 annexation of the Crimean peninsula, Bloomberg reported. 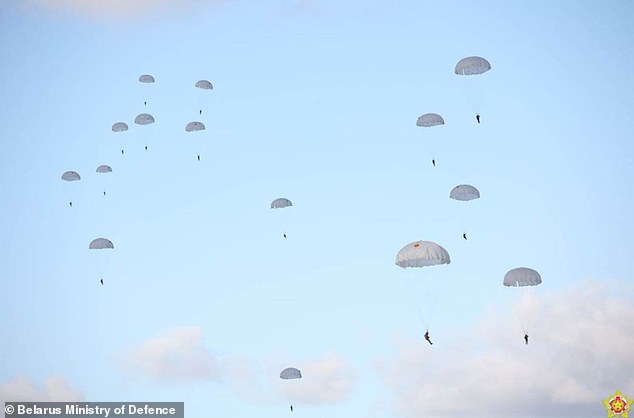 Russia and Belarus said paratroopers from both countries had been involved in joint drills in Gozhsky today, located just 20 miles from the Polish border where migrants are trying to cross 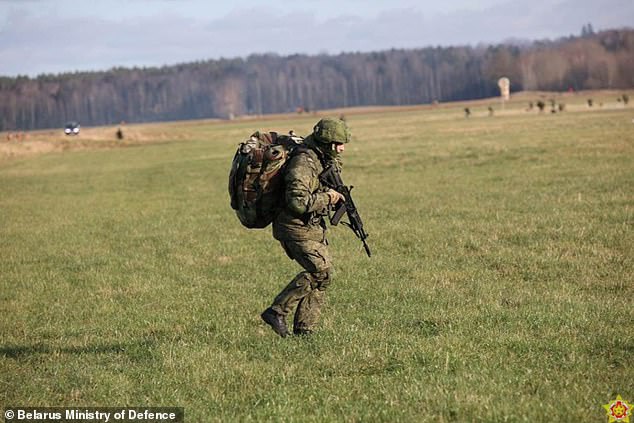 The Belarusian defence ministry said the troops practiced capturing bridges, hunting down and destroying targets, and defeating enemy patrols during the drill to ‘test combat readiness’ 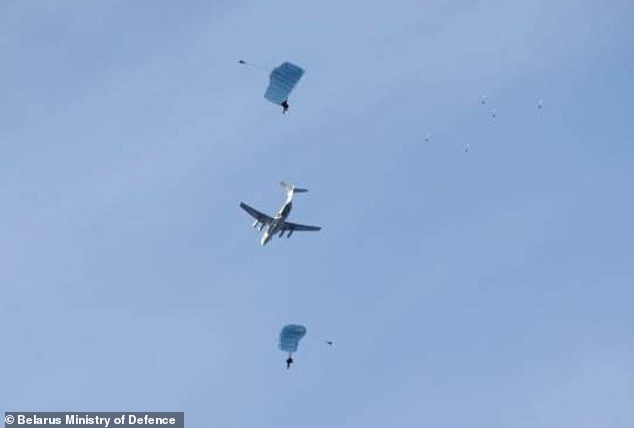 The surprise training mission came as it was revealed British military engineers are now at the border to strengthen the defences, amid warnings from all sides that the situation risks spilling over into armed conflict 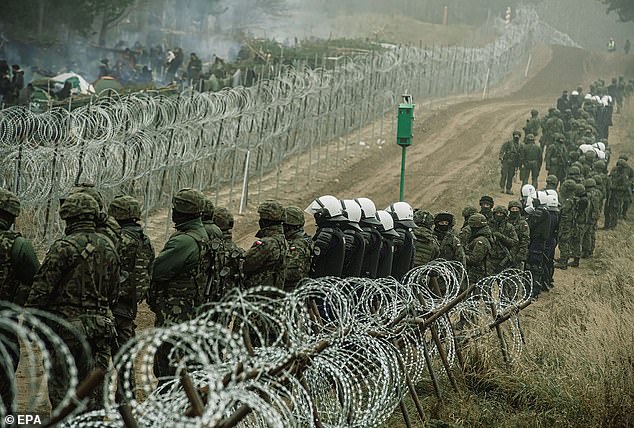 Poland has deployed some 15,000 troops to its eastern border where they have spent much of this week trying to hold back thousands of migrants that Lukashenko’s regime is accused of forcing into the region 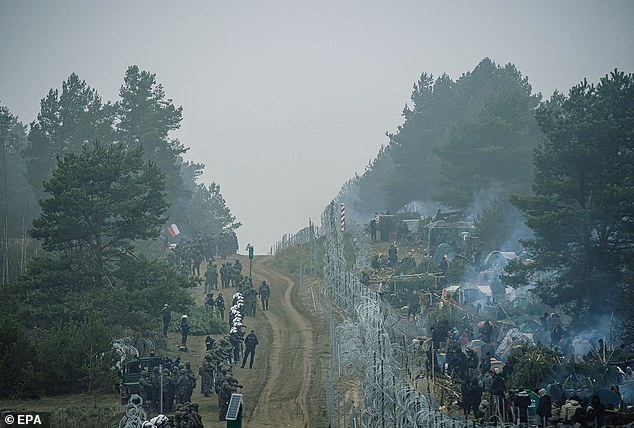 Poland, along with the leaders of nearby Latvia, Lithuania and Estonia, has been warning that the crisis has the potential to spill over into a full-blown conflict 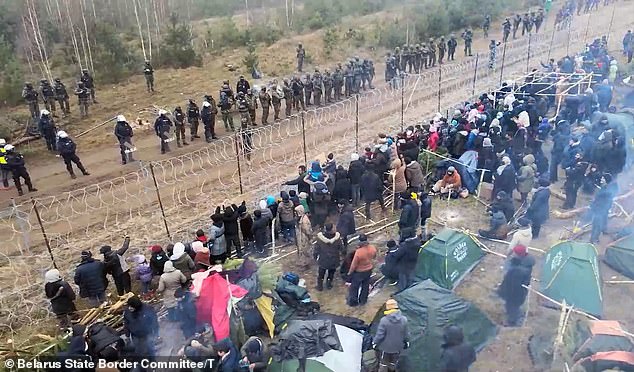 The military drills are taking place just 20 miles from the Kuznica border crossing with Poland, where thousands of migrants are currently gathered trying to cross over 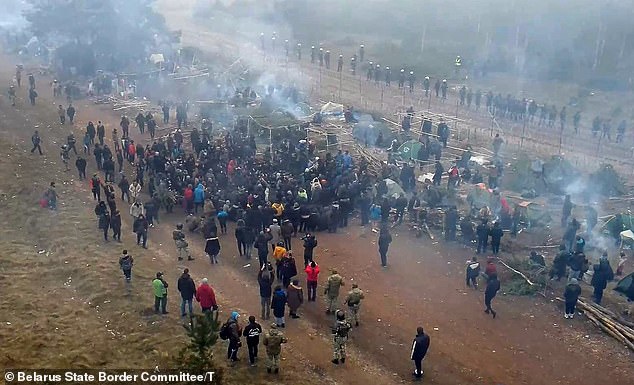 Poland has reported dozens of attempts to cross the border today, including a group of migrants who broke through the Belarusian side of the crossing and began trying to cross the Polish side of the fence

The US has refused to share exactly what intel it has of an imminent attack, but the warning comes after satellite images revealed a build-up of tens of thousands of Russian troops, tanks and artillery pieces close to the border.

The EU accuses Lukashenko of forcing migrants to make illegal crossings into Poland in a cynical attempt to destabilise the bloc using vulnerable people as his weapon.

On Thursday, Lukashenko himself warned of the risk of a conflict and accused armed groups in the Donbas region of Ukraine of trying to ship weapons to the migrants on the Polish border in order to spark fighting.

‘They are Kurds, and the Kurds are militant,’ he said according to Polish newspaper Wyborcza. ‘When Poles beat them, cut them, torment them, etc., they become desperate. One rifle, one gun, and armed conflict is ready.’

Lukashenko has also threatened to cut off natural gas supplies running from Russia and through his country into Europe – though that threat was angrily slapped down by Moscow today.

Dmitry Peskov, Putin’s spokesman, said Lukashenko had not coordinated with Moscow before making the remark and added that Russian pledged to fulfil gas contracts are ‘beyond doubt’.

It came after Lukashenko spoke out at a meeting of government officials on Thursday, musing: ‘We are heating Europe and they are threatening us… What if we cut off their natural gas?

‘I would recommend the Polish and Lithuanian authorities to think before they speak up.’

Russia’s Yamal-Europe pipeline runs through Belarus and into Poland, representing about 20 per cent of the country’s total gas-carrying capacity into Europe.

The continent relies on natural gas for around a quarter of its energy needs, more than half of which is piped in from Russia – which sits on top of the world’s largest gas reserves.

Just weeks ago, European leaders were trying to negotiate with Russia to increase supplies as stockpiles of gas ran low due to surging demand as economies reopen post-Covid.

The EU accused Putin of throttling the flow of gas as a political bargaining tool to try and get a new gas pipeline – the multi-billion dollar Nord Stream 2 – opened. He denied the allegations.

Concerns about Russian troops on Ukraine’s border have been ongoing since at least April this year, when Putin moved around 100,000 soldiers, tanks and artillery pieces to the region without warning.

He later said the exercise was to test ‘military readiness’ and pulled some of the units back, but NATO warned that many of them had remained at the front even after the ‘exercise’ was over.

The Royal Netherlands Air Force on Friday said that it had also scrambled fighters, two F-16s, to the North Sea after spotting the Russian bombers. The air force said it handed over to allies from the RAF.

Flight tracking data showed a NATO warplane was dispatched from Cologne and circled around the Norwegian coast before heading back to Germany.

An RAF spokesman said: ‘Quick Reaction Alert Typhoon fighters from RAF Lossiemouth & Coningsby, supported by a Voyager Tanker from RAF Brize Norton, have been launched against an unidentified aircraft approaching the UK area of interest.

‘We will not be offering any additional detail on this ongoing operation until complete.’