A New Zealand city removed its official wizard from its public payroll after 23 years of service after joking about beating women.

London-born Ian Brackenbury Channell, 88, received NZ $ 16,000 (£ 8,200) annually for “Magic Shops and Other Wizard-Like Services” to promote Christchurch under a contract signed in 1998.

The city said it ended Channell’s contract because it wanted to go in a more modern and diverse direction.

But the wizard himself claimed to the local media that he was “canceled” because he no longer fit the “vibes” of the city, calling himself a “provocateur”.

“They are a bunch of bureaucrats who have no imaginations,” he told news website Stuff.

In April, Channell said on a comedy show that he “would never hit a woman for bruising too easily” – a comment that drew significant criticism. 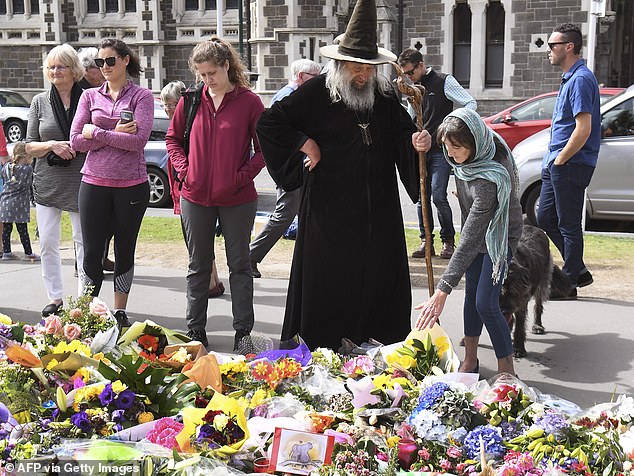 The city said it terminated Channell’s contract because it wanted to go in a more modern and diverse direction. But the wizard claimed that it was “canceled” because it no longer fit the “vibes” of the city. Pictured: Channell speaks to locals in front of a memorial in the Botanical Gardens after the Christchurch Twin Mosque shooting in 2019

“I love women, I forgive them all the time, I’ve never hit one. Never hit a woman because she bruises too quickly and they will tell the neighbors and their friends … and then you will be in big trouble, “he said.

At the beginning of the show, Channell said he enjoyed teasing women by telling them they were sneaky and saying, “They use cunning to get men who are fat”.

A council spokesman told The Guardian that a letter had been sent to Channell thanking him for his services and informing him that his contract had been terminated.

Lynn McClelland said Channell would be “forever a part of” [Christchurch’s] Story’.

Despite his termination of employment, the wizard told Stuff that he will continue to perform his duties.

“I will continue anyway. You’re going to have to kill me to stop me, ”he said. 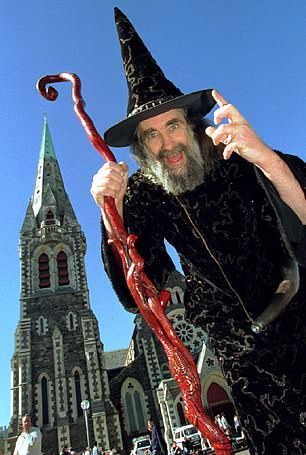 Channell, often wearing a long cape and a pointy hat, has become a tourist attraction in Christchurch and was even on the list of Queen’s Birthday Honors in 2009 [File photo]

‘It’s just them [the council] I don’t like me because they’re boring old bureaucrats and everyone likes me and nobody likes them, ”he said.

Channell began performing magical acts as public entertainment in Christchurch after arriving in New Zealand in 1976.

When police tried to arrest him, a public protest resulted in a local square being designated as a public area.

Since then, Channell, often wearing a long cape and pointed hat, has become a tourist attraction in Christchurch and was even on the list of Queen’s Birthday Honors in 2009.

In 1982 he was declared a living work of art by the New Zealand Art Gallery Directors Association, and in the same year he became the city’s official magician in 1982.

Under a unique tax-free status, he has since received approximately $ 368,000 from the state. He is said to have been the only state-appointed magician in the world.

Before moving to New Zealand, Channell studied sociology and psychology at the University of Leeds.

He then moved to Australia to teach sociology at the University of New South Wales.

In 1990, then New Zealand Prime Minister Mike Moore asked Channell “to give urgent consideration” to becoming the country’s official wizard.

“I am concerned that your wizardry may not be available to the whole nation,” Moore wrote in a letter.

“Undoubtedly there will be repercussions on spells, blessings, curses and other supernatural matters beyond the purview of mere prime ministers.”