This is the moment Extinction Rebellion activists were violently removed by angry Italian motorists after they blocked a busy motorway in Rome on Thursday.

The protesters, demonstrating for environmental issues, sat in a row on Rome’s Raccordo – the city’s main ring road and one of the busiest – and held banners.

Video captured from the side of the dual carriageway showed the protesters using roadblock protest tactics also used in the UK, causing a huge traffic jam to snake as far as the eye could see with no police officers or vehicles in sight were .

In response, angry Italian motorists at the front of the queue jumped out of their vehicles to take action – dragging the protesters across the tarmac and throwing them to the curb.

Scroll down for videos

Pictured: This is the moment Extinction Rebellion activists were violently removed by angry motorists after they blocked a busy motorway in Rome on Thursday

A man snatched an orange banner from Extinction Rebellion activists and threw it over the side of the highway barrier. A woman wearing a sundress and still carrying her purse snatched a second sign from their hands.

After the banners were removed, a second man joined the first to forcibly drag the protesters by their arms across the tarmac to the curb, creating a gap for multiple vehicles to pass through and past the demonstration.

However, as the first man dragged the remaining protesters off the street, the activists he removed first saw an opportunity and ran back to the center of the street and in front of oncoming traffic – only to be seated again with their flag. 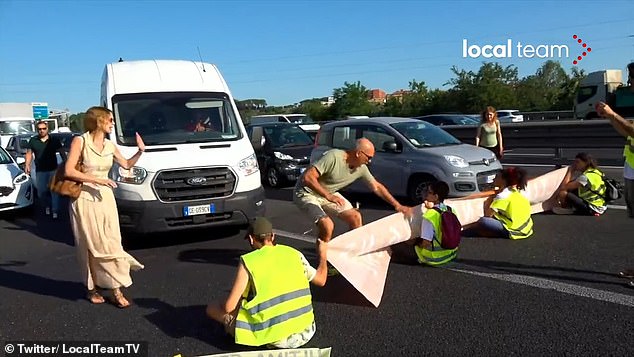 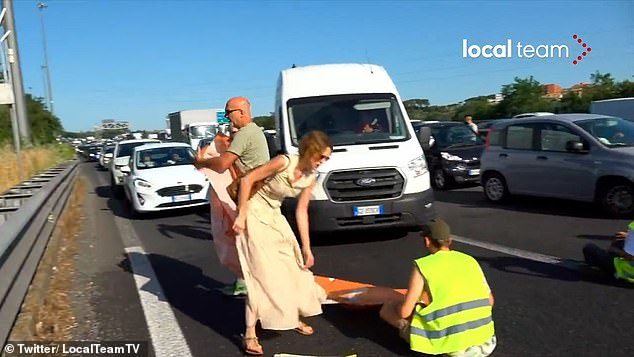 Pictured: Two motorists are shown tearing banners away from protesters in Rome on Thursday 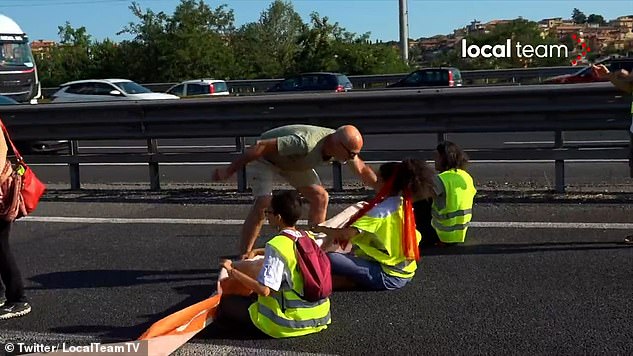 Pictured: An angry motorist tries to rip a banner from an Extinction Rebellion protester who was sitting in the middle of a busy freeway on Thursday 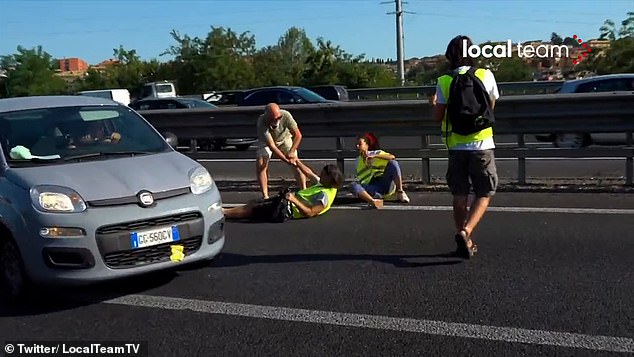 With no police in sight, Italian motorists had to take matters into their own hands, dragging the activists off the road so the cars could pass

When traffic was blocked again, the man grabbed one of the demonstrators by the hair and again dragged her to the side of the road. This didn’t deter her, however, as she quickly shuffled back in front of the traffic.

The group is calling for the end of all fossil-fuel extraction projects and demands that Italy not restart its coal-fired power plants – and instead develop more wind and solar power sources.

The UK has grappled with similar protests in recent years, with Extinction Rebellion also wreaking havoc on public transport. Another group – Insulate Britain – has used the same roadblock tactics as activists in Italy. 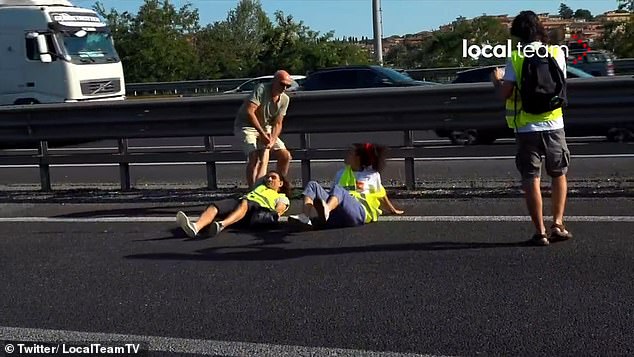 Pictured: A motorist pulls an Extinction Rebellion protester off the road 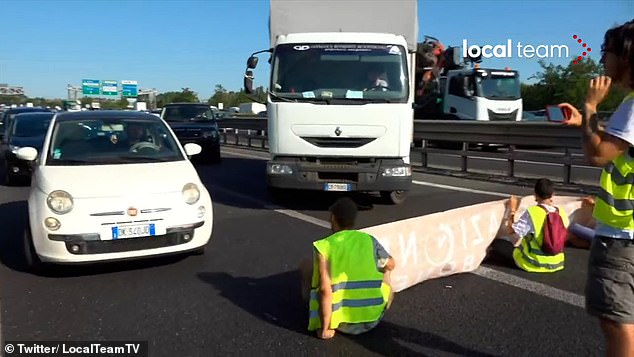 As some drivers paused for the gap left by their fellow drivers, the protesters quickly repositioned themselves and blocked the road again 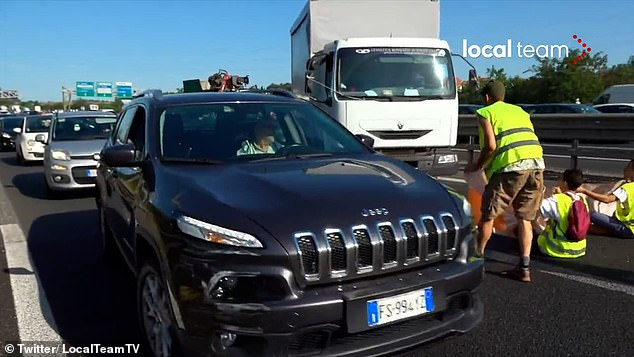 Some cars managed to get through the roadblock, but after they were removed, activists quickly shuffled back in front of traffic and continued to block the busy ring road 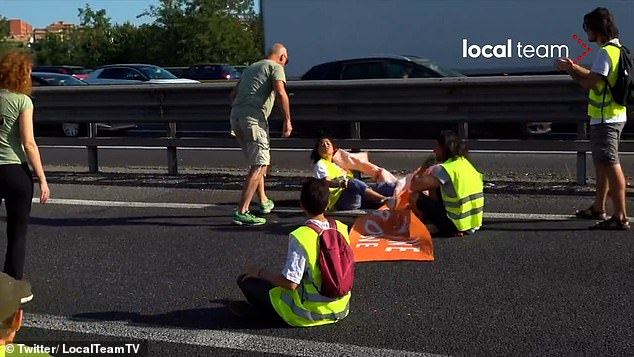 Pictured: The man most energetic in a video of the incident was shown pulling one of the protesters by the hair in an attempt to get her off the busy street

Legal action has been taken against the protesters and restraining orders have been issued to deter activists from possible jail terms.

The video showed the first man – dressed in sunglasses, shorts and a T-shirt – shouting in the face of the activist, who had settled back down in the middle of the street.

This time he picked her up and threw her to the side of the road. Meanwhile, the second man was able to create a gap between the activists long enough for more cars and trucks to drive through and drive away from the scene.

However, at the end of the video, the protesters are shown continuing their efforts and blocking at least half of the street – again with their orange banner.

Corriere Dello Sport reported that the protest was eventually dispersed with the arrival of the local police, the Carabinieri (Federal Police) and the Digos (Special Forces), and the protesters were taken into custody.

Why Planet Labs’ shoebox satellites are heading into orbit with SpaceX