A desperate Vladimir Putin is considering turning to North Korean dictator Kim Jong Un for help with his invasion of Ukraine and is ready to offer energy and grain for 100,000 troops, according to reports in Russia.

North Korea has made it clear through “diplomatic channels” that it is not only providing construction workers to repair war damage, but is also prepared to provide a huge military force to tip the balance in Moscow’s favor, Regnum news agency reported.

A desperate Vladimir Putin is considering turning to North Korean dictator Kim Jong Un for help with his invasion of Ukraine and is ready to offer energy and grain for 100,000 troops, according to reports in Russia. Pictured: Kim inspects his troops in April 2022

“The country is ready to redeploy up to 100,000 of its troops to the Donbass,” the pro-Kremlin news agency said. “Pyongyang will be able to move its tactical units to the Donbass.”

In return, Kim’s ailing economy would be supplied with grain and energy.

Korotchenko, editor-in-chief of Russia’s National Defense magazine on the Rossiya 1 channel, said: “There are reports that 100,000 North Korean volunteers are ready to come and take part in the conflict.”

He was challenged by other propaganda channel hosts if they could be volunteers from North Korea, where absolute obedience is required.

But he said North Koreans are “resilient and undemanding” and “the most important thing is that they are motivated”. He told viewers, “We shouldn’t be shy about accepting the hand extended to us by Kim Jung-un… 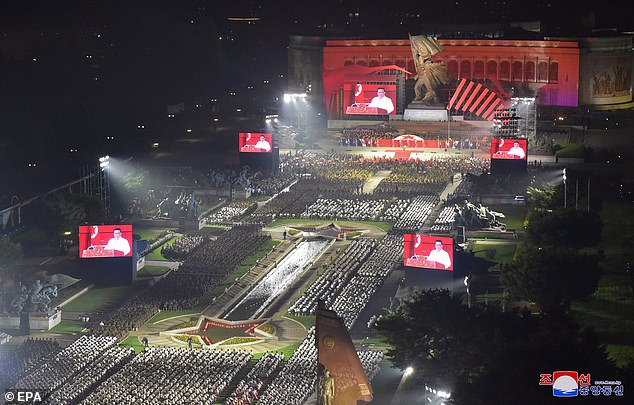 North Korea has made it clear through “diplomatic channels” that it is not only providing construction workers to repair war damage, but is also prepared to provide a huge military force, Regnum news agency reported. Pictured: Kim Jong Un chairs an event marking the 69th anniversary of the Korean War in Pyongyang, North Korea, July 27 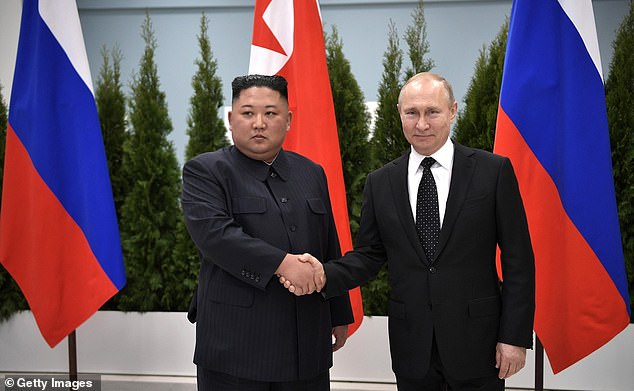 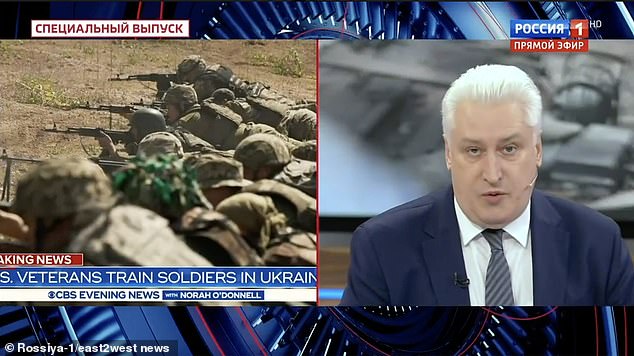 “If North Korean volunteers want to participate in the conflict with their artillery systems, rich experience in anti-battery warfare, and North Korean-made large-caliber multiple-launch missile systems, then let us give the green light to their volunteer impetus.”

He said, “If North Korea expresses a desire to fulfill its international duty to fight Ukrainian fascism, we should allow it.” It is the “sovereign right of the DPR and LPR to sign the relevant agreements,” he said.

Russia has repeatedly claimed Ukraine is a “fascist” country as one of its many ways to justify Putin’s brutal invasion that has killed thousands of civilians and forced millions to flee.

Relations between Russia and North Korea date back to 1948, when the Soviet Union was the first country to officially recognize the DPRK. During the Korean War, the Korean People’s Army was supported by the USSR.

Relations between the two countries continued even after the dissolution of the Soviet Union, although Vladimir Putin gave them more importance when he was elected president in 2000. Kim Jong Un accepted an invitation to visit Russia in 2015, and the couple met on Russian soul – in Vladivostok – on 2019.

When Putin launched his invasion of Ukraine on February 24, North Korea was one of five countries to vote against a United Nations resolution condemning the invasion.

North Korea also became the third country to recognize the independence of the breakaway states of the Donetsk and Luhansk People’s Republics in eastern Ukraine — territory captured by Russian forces during the invasion.

Ukraine responded by cutting off all diplomatic relations with North Korea. 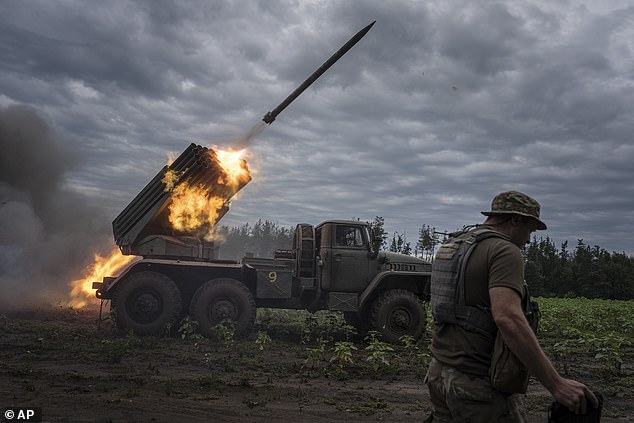 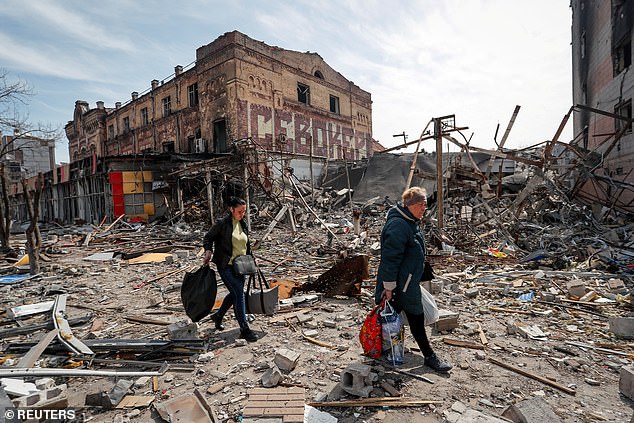 Pictured: Residents carry their belongings near buildings destroyed in the conflict between Ukraine and Russia in the southern port city of Mariupol

The claim to North Koreans comes as Russia is desperate to bolster its front-line troops by recruiting prisoners and forgoing their prison sentences.

A father army of men in their 50s and 60s are also being recruited with offers of higher pay than many in Putin’s ailing economy are receiving.

It comes as Russia’s invasion of Ukraine enters its sixth month, after Moscow brazenly expected to capture Kyiv in days. Instead, Putin’s forces are battling a bitter Ukrainian defense in a protracted conflict, with tens of thousands of Russian deaths forecast.

The recent addition of US-made HIMARS missile systems to Ukraine’s arsenal has even begun to shift the scale in Kiev’s favor in some regions.

Ukraine officials said they operate up to a dozen HIMARS systems, whose accuracy and long range have allowed Kyiv to reduce Russia’s artillery advantage.

Korotchenko is known for his fierce pro-Putin rhetoric.

He recently called on Putin to bomb Kyiv with a Kalibr cruise missile with the inscription “Hasta la vista baby!” during a farewell visit from Boris Johnson – not to “assassinate” the British Prime Minister, but to show strength.

Russians should “not be ashamed” of their ambition to wipe out Ukraine as an independent state, he also said recently.

Such a goal is “perfectly healthy,” he said.

Historically, Ukraine “never existed” as a truly independent state, he falsely claimed. “It’s an artificial ‘formation’ created thanks to the national policies of the Bolsheviks after 1917,” he said.

But now it had become “a stepping stone for a blow to Russia.”

Their political elite have “no right to exist from the point of view of the national interests of our country”.

The West “will not be able to influence the determination of the leadership of our country and our people so that such a threat from the area now called Ukraine never exists”.