The Chinese passenger jet that crashed into a mountain earlier this year, killing all 132 people on board, was intentionally crashed by the pilot or an intruder, according to investigators.

Flight data from the black box recovered from the China Eastern Boeing 737-800 shows human interference forced the plane into a nosedive as it crashed to the ground in the mountainous Guangxi region on March 21.

Experts believe this shows that only murder-suicide could explain why the plane came to a near-vertical trajectory after finding no technical errors.

“The plane did what someone in the cockpit told it to do,” a source told the Wall Street Journal.

While the pilot is a prime suspect, investigators are not ruling out the possibility that a crew member or passenger may enter the flight deck and take control.

The Chinese passenger jet that crashed into a mountain earlier this year, killing all 132 people on board, was crashed intentionally, investigators believe 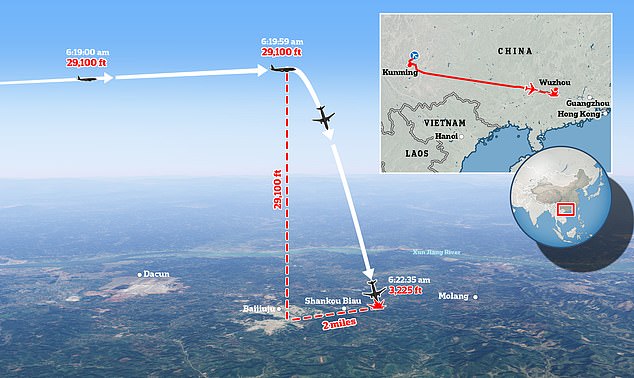 The plane, flight number MU5735 from Kunming to Guangzhou, ran into trouble over the city of Wuzhou before crashing 29,100 feet into a mountainside 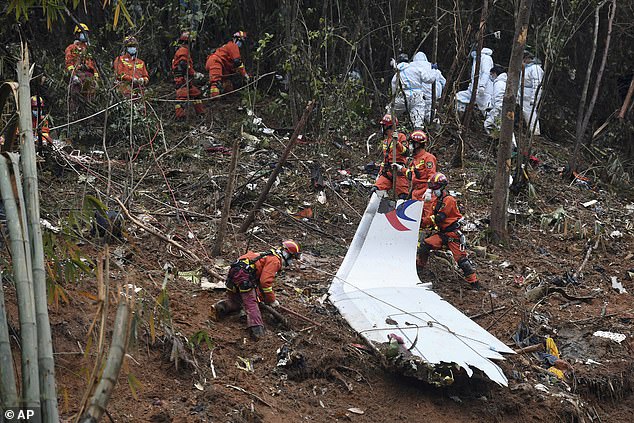 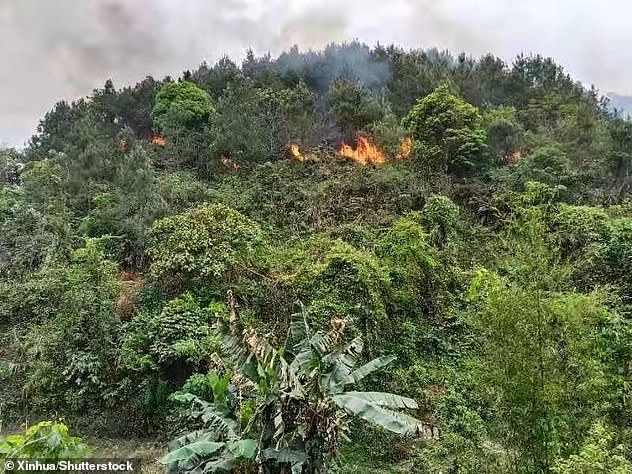 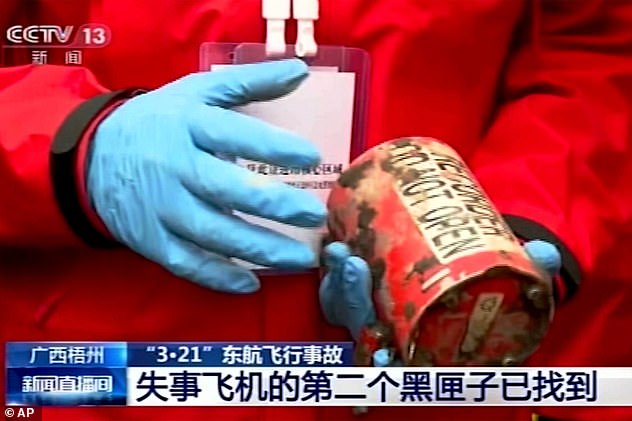 Flight data from a black box (one of those found) recovered from a Chinese plane crash earlier this year suggests someone in the cockpit deliberately brought down the jet, it has been reported

Chinese authorities have found no evidence of a technical malfunction on the plane and the crew is now under investigation.a Western official told Reuters.

It also prompted China Eastern to ground all of its Boeing 737-800 planes – fueling fears about the aerospace company’s jets – which was reversed a month later.

A report issued by China’s Civil Aviation Administration in April said no abnormalities had been identified with the plane, its crew or external elements such as inclement weather.

At that time, the investigators were still trying to extract data from the badly damaged black box with flight data and voice recording devices.

At the time of the crash, the crew reported no problems before losing contact with air traffic control. 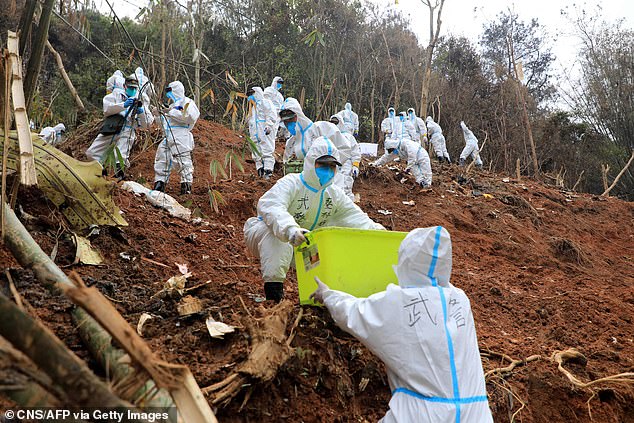 The China Eastern Boeing 737-800 went into a sudden dive, seemed to recover briefly, and then hit the ground in the mountainous Guangxi area on March 21 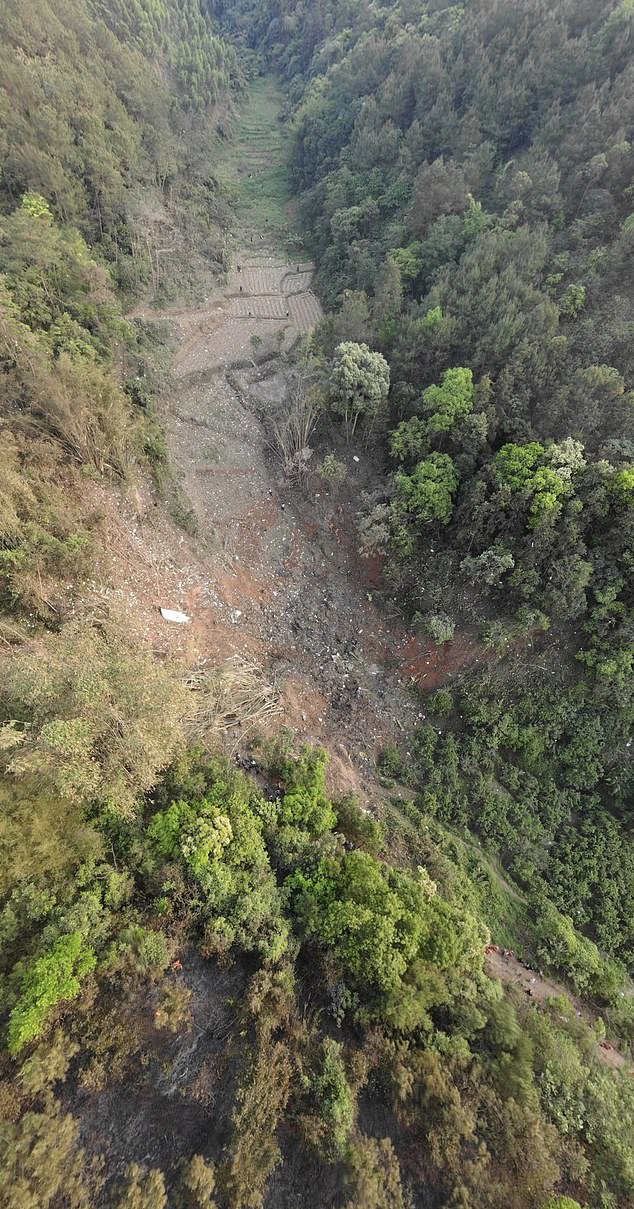 The crash left a 65-foot deep crater in a mountainside, crushing the plane and starting a fire in the surrounding forest 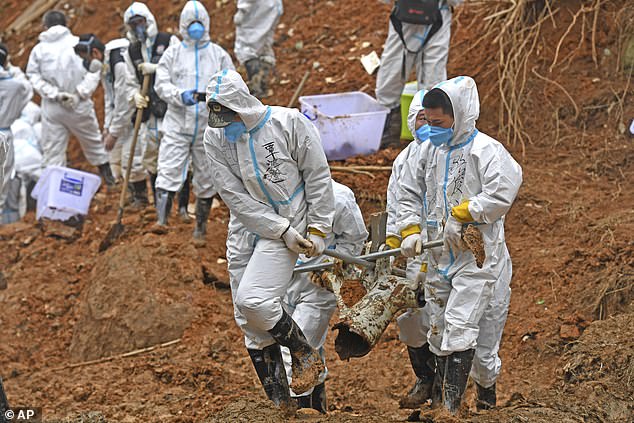 More than 49,000 pieces of aircraft debris were found. It took two days to locate the cockpit voice recorder and six days for the flight data recorder, which was buried 5 feet underground 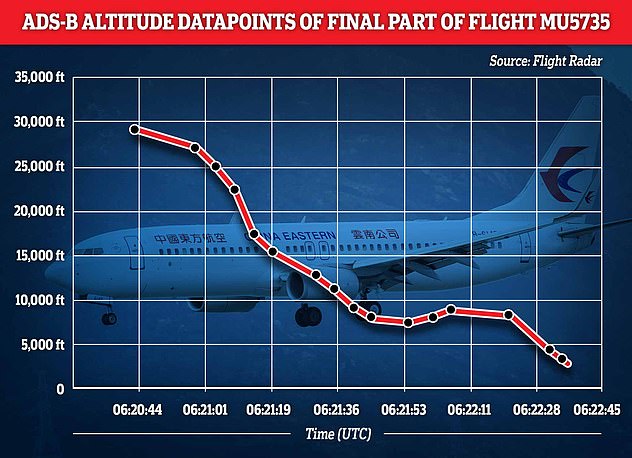 Pictures show the crash left a 65-foot-deep crater in a mountainside, crushing the plane and starting a fire in the surrounding forest.

More than 49,000 pieces of aircraft debris were found. It took two days to locate the cockpit voice recorder and six days for the flight data recorder, which was buried 5 feet underground.

Pilots have already shot down planes, such as Germanwings Flight 9525 Andreas Lubitz, who was previously treated for depression and suicidal thoughts.

He locked the captain out of the cockpit before crashing the plane into a mountain near Prads-Haute-Bléone, Alpes-de-Haute-Provence, France, killing 150.

There was also a LAM Mozambique Airlines Flight 470 in 2013 and an EgyptAir Flight 990 that resulted in the deaths of 33 and 217 people, respectively.

China Eastern, one of four major Chinese airlines, and its subsidiaries all grounded their Boeing 737-800s, more than 200 planes, after the crash but have since returned them to service.

The aircraft was delivered to China Eastern by Boeing in June 2015 and has been flying for over six years.

The airline said the landing was a precautionary measure and did not indicate a problem with the aircraft, which airlines around the world rely on the most.

As of mid-April, it had resumed operating the 737-800 aircraft, and Chinese regulators did not provide technical recommendations for the 737-800, which has been in service since 1997 with a strong safety record, experts said.

Boeing – one of the largest manufacturers of aerospace technology – recently came under fire for plane crashes involving 737-800s.

The company declined to comment and referred Reuters to the Chinese investigators, while the US National Transportation Safety Board did not immediately respond to requests for comment.

China Eastern said, “Any unofficial speculation may affect the investigation into the accident and affect the real progress of the global aviation industry.”

Reuters reported that Boeing shares were up 5.1% in afternoon trade.

I tried to buy an Olive Garden NFT. All I got was heartburn.