British musician, 28, is killed by ‘group of men who beat him and threw him into a river’ in Georgia

A British tourist was killed in Georgia by “a group of men who beat him unconscious and threw him into a river after an argument,” authorities say.

The body of musician Thomas Kennedy, 28, washed up in the Mtkvari River near the village of Kvakhvreli in Gori on Friday, three days after he was allegedly killed by a group of five Georgian citizens.

Giorgi Balashvili, 28, was arrested on suspicion of murder along with his friends Giorgi Okhanashvili, 17, Giorgi Kareli, 20 and Zura Palavandishvili, 19, along with Vasil Okropiridze, 24, who denied any involvement in the conspiracy.

Kennedy is said to have been invited to drink by the men after starting a conversation with street musician Okropiridze in Gori town, but was later badly beaten by the group after they got into a drunken argument.

A police investigation suggests that Kennedy was alive but passed out when he was thrown into the river after the defendants panicked over believing they killed him when he passed out.

A Georgian court heard that Kennedy was thrown into the water in the town of Gori, but his body traveled two miles downstream before being discovered three days later.

British musician Thomas Kennedy, 28, (pictured) was killed in Georgia after an argument with a group of local men who attacked him and fell into the Mtkvari River, authorities said

The talented musician Kennedy, 28, was targeted by the group, according to police.

After a day trip to the Joseph Stalin Museum, Kennedy began speaking to Okropiridze when four local “seedy” Georgians invited him for beer, a prosecutor told a Georgian court yesterday.

Kennedy’s phone, wallet, and credit card were missing when he was found, prompting police to open a murder investigation when they discovered that his phone had been sold at a local pawn shop.

Okropiridze denied not informing the police about the conspiracy, in which he says he was not involved.

The other defendants admitted the robbery but denied the murder, claiming instead that Kennedy ran away from the fight when he himself fell into the river and drowned.

But prosecutor Micheil Beriashvili said: “Prosecutors are not satisfied with the defense’s argument that the victim jumped into the river or fell into the river.

“We believe we are dealing with premeditated murder to destroy the incriminating evidence of another crime – robbery.

“This was also done against a helpless person.”

All five defendants have been in custody for two months. They face 13 to 17 years in prison if found guilty in their November 8 trial. 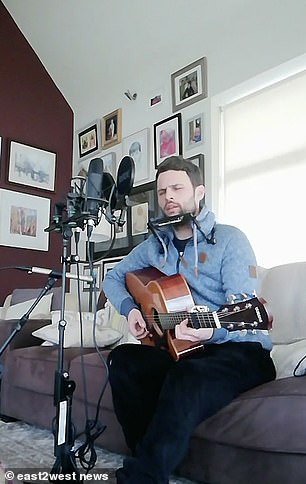 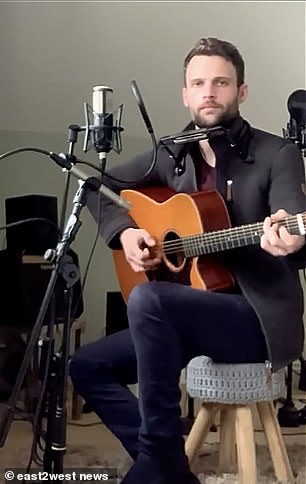 The musician (playing guitar in the picture) arrived in Georgia on August 30th and was a student at a local music college. Thomas was attacked and then thrown unconscious in the river, and his body was found near the village of Kvakhvreli on October 8

A Mtavari television report said Kennedy arrived in Georgia on Aug. 30 and was reportedly a student at a local music college.

Kennedy reportedly told friends he wanted to “go somewhere far away” after struggling with the lockdown and allegedly met a Georgian girl online before traveling to the former Soviet republic.

He stayed in the capital, Tbilisi, but visited the museum of the communist dictator on the day of his death. 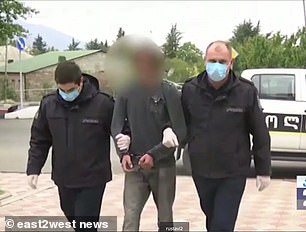 Five Georgian nationals, including one minor, have been arrested on suspicion of murder and if found guilty, they face between 13 and 17 years in prison

Relatives have paid tribute to the “friendly” Kennedy, who comes from a large Irish family and whose death devastated parents Eddie and Cathy.

Aunt Patricia Pointon from Derbyshire wrote on Facebook: “RIP, my beautiful nephew. You were unique in every way. As one of the kindest souls who have ever lived on this earth, you trusted your heart and played your music as a genius! We will never forget you … Tom sleep well. ‘

Her husband Darren Pointon told the Mail Tom that he left the family home in Larhardane, County Mayo, Ireland after speaking to a Georgian girl online.

Pointon said, “We are a very close family. As far as I know, Tom had chatted with a girl online and went out to meet her.

“But after a week or so it didn’t work out. I don’t know if he stayed with her or just traveled around.

“Tom decided to stay because he still has a few weeks on his visa and he liked the area.

“Tom was a handsome, clean, living fellow. He has not had a drink in three years and the family are upset by reports that he has been drinking.

“We’re waiting to find out what happened, but I haven’t seen him drink at family gatherings in three years.

“He was a lovable, talented guy who lived for music. He played guitar, violin and piano, played a bit of street music himself and wrote his own songs. Maybe that’s how he got into conversation with these people.

“The family over in Ireland is trying to get out of there so they can take Tom home.”

A Federal Foreign Office spokesman said: “We are in contact with local authorities and support his family following the death of a British man in Georgia.”

Russian warships stage show of strength off of Japan