Shocking footage has emerged from Bulgaria’s last remaining mink farm, where up to 100,000 animals are killed each year.

Footage shows gaping mink trapped in tiny, rusty cages covered in cobwebs. Several mink were crammed together in some cages, while the carcasses of some animals were left to rot.

Other mink had escaped from the broken cages and were found by investigators roaming free in the dirty and cruel conditions on the farm.

Scroll down for videos

Shocking footage of Bulgaria’s last remaining mink farm, where up to 100,000 animals are killed each year, has been released 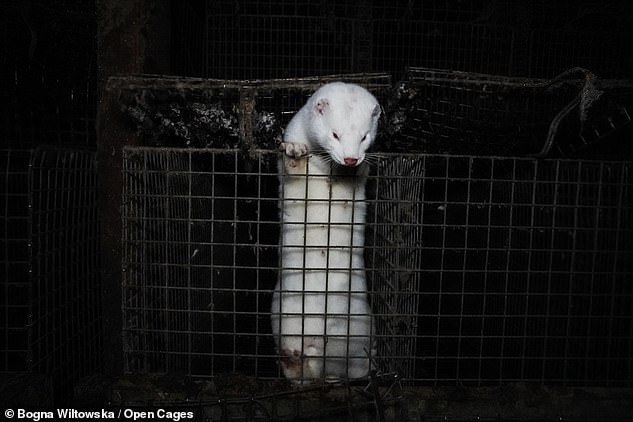 Footage from inside the farm showed mink trapped in tiny, rusting cages. Many had gaping wounds, and in some cages the carcasses of the animals had been left to rot 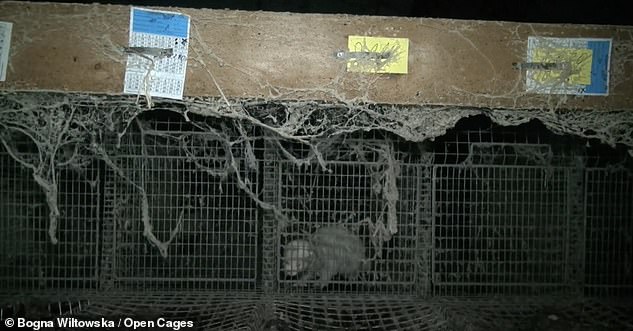 Pictured: A mink is seen in cages covered in cobwebs at the Bulgarian fur farm

The footage was released by animal rights organizations Open Cages and Humane Society International. Open Cages said it was releasing the footage in response to the UK government dropping its Animals Abroad Act.

Citing the Bulgarian Mink Farmers’ Association, the group said the farm featured in the footage is WelFur certified, a program run by the fur industry to determine whether such facilities meet animal welfare requirements.

The charity told MailOnline that investigators visited the farm in Madzherito, central Bulgaria, on several occasions throughout 2021.

The footage was released together with the Bulgarian animal welfare organization Nevidimi Zhivotni (Invisible Animals), which has been warning about conditions at the farm for years.

Not only are conditions cruel, mink escaping from fur farms can wreak havoc on local wildlife populations and agriculture.

“It is clear that on this farm, like any other fur farm, the animals are suffering,” said Open Cages CEO and Founder Connor Jackson.

“The place is in a total state of neglect and chaos: the cages are broken and covered in litter, there are cobwebs and dirt above and below the cages, what appears to be old food rotting on the cages,” Jackson continued.

“Behind the idyllic image of a professional, modern, and welfare-certified farm, these animals must endure open wounds and untold misery, all for a piece of pointless fur: the kind that continues to be sold on Britain’s high street.” 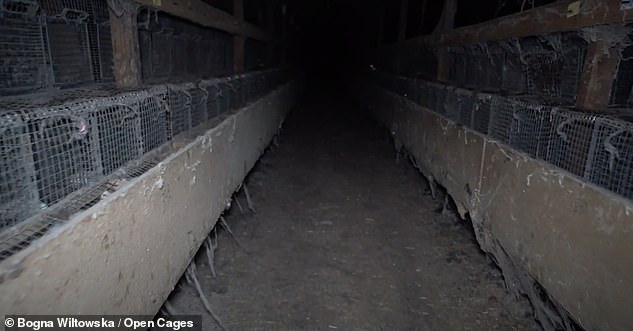 Pictured: A passageway inside the Bulgarian mink farm runs between the animals’ cages 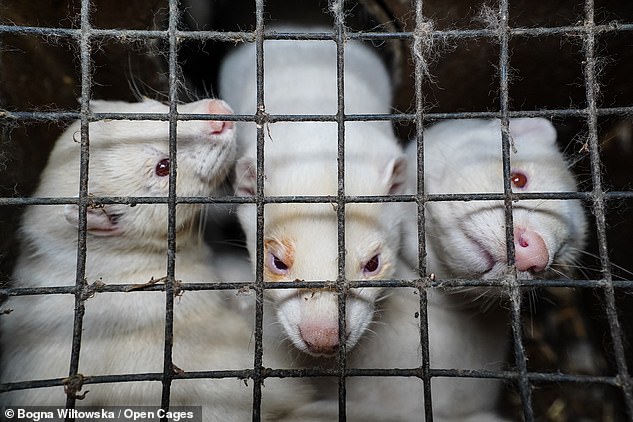 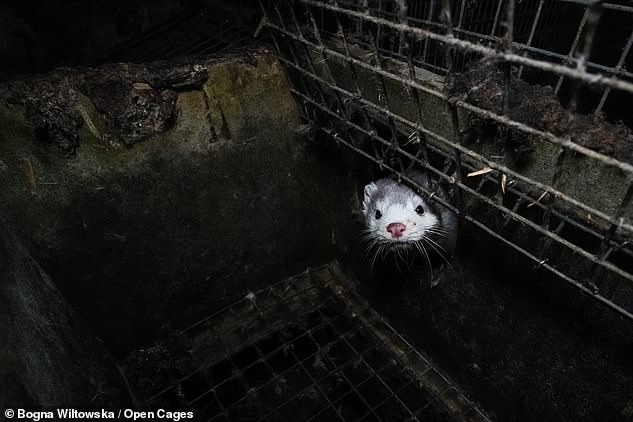 The footage was released by animal rights organizations Open Cages and Humane Society International. Open Cages said it was releasing the footage in response to the UK government dropping its Animals Abroad Act

Open Cages said the footage appeared to have shocked the Bulgarian government, and reported that the country’s Environment and Water Minister – Borislav Sandov – had issued a bill banning the farming and import of American mink due to the threat they pose represent would prohibit native species.

Figures from the Bulgarian government show that the country raises around 120,000 mink annually.

Open Cages said it was releasing the footage in response to the UK dropping plans to introduce the Animals Abroad Act – which would ban fur imports from abroad.

The bill was aimed at tackling cruel animal practices abroad and ensuring the UK does not get involved in such industries.

While fur farming was banned in England and Wales in 2000 and in Scotland and Northern Ireland in 2002, it remains legal to import some fur from abroad.

Between 2015 and 2020, statistics from HM Revenue & Customs show that the UK imported £11,039 worth of Bulgarian fur. Though the number is fairly low, the charities said the video showed the cruelty of the entire industry.

Claire Bass, Chief Executive of Humane Society International said: “As long as the UK is part of the global fur trade we are 100% complicit in the unimaginable suffering endured by this farm in Bulgaria and so many other fur farms, research shows the abject misery of animals caged and killed for their fur.’

After the bill was omitted from the Queen’s speech last week, ministers have been accused by campaigners of “betrayal of animals”, while Tory MPs questioned why Prime Minister Boris Johnson backed away from the manifesto’s pledges. 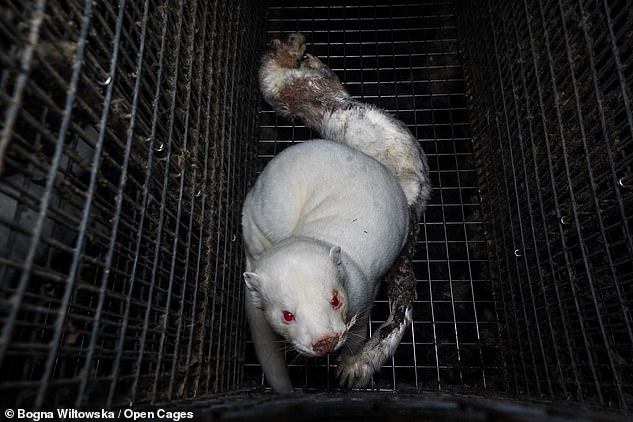 Pictured: A mink is trapped at the bottom of a cage containing a dead animal carcass 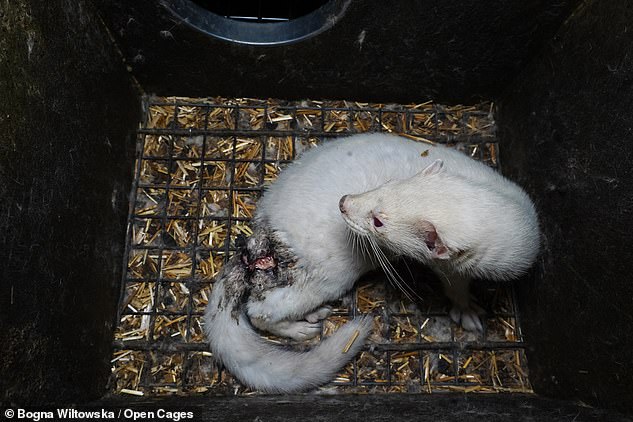 Pictured: A mink is shown in a rusty cage with an open wound at the farm in Bulgaria

The now-abandoned bill was part of the government’s “Action Plan for Animal Welfare”. It promised to consider a post-Brexit ban on “the import or sale of foie gras and other products derived from animal welfare systems”.

Ministers pledged to “examine possible measures” to ban imports of all fur products. And the bill also included provisions banning the promotion and sale of “low-welfare experiences” abroad, such as B. Elephant riding.

A coalition of 38 organizations including the RSPCA, Compassion in World Farming, Four Paws UK, Humane Society International and Save the Asian Elephants today condemned the failure to submit the Animals Abroad Bill.

Recent national polls for the #DontBetrayAnimals campaign found that more than three-quarters (77%) of the government want the government to ban imports of products that are bred or produced in ways that are already banned in the UK, such as: B. Fur.

Speaking on behalf of the campaign, RSPCA’s Emma Slawinski said: “We are deeply dismayed that the government has broken its promise to prioritize animal welfare by abandoning the Animals Abroad Act.”

Slawinski said this means that “animal welfare laws like import bans on foie gras and furs will no longer apply, nor will bans on advertising animal tourism practices that involve cruelties like elephant riding and tricks.”

“The Government’s waiver of the Animals Abroad Bill speaks for itself; it is a betrayal of animals and a disregard for public opinion.” 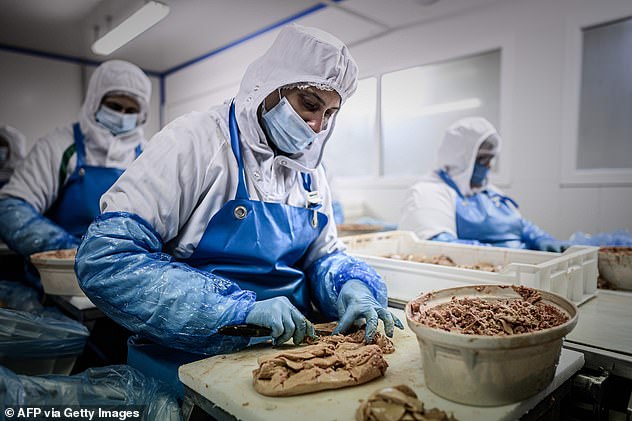 The government had previously promised to consider a post-Brexit ban on “the import or sale of foie gras and other products originating from systems with low animal welfare”.

In response to the absence of the bill from the Queen’s speech, senior Conservative MP Sir Roger Gale tweeted: “Where is the Government’s commitment to making manifesto commitments on animal welfare in the legislative programme?

“I trust that “other measures will be presented to us”. It means “keep our word” and we have to do that.”

Earlier this year, Brexit Chancellery Secretary Jacob-Rees-Mogg and Mark Spencer, leader of the House of Commons, are said to have led a cabinet revolt against import bans on the basis that consumers should be free to choose whether or not to buy fur or foie gras.

Lord Goldsmith said at the time: “The public strongly supports measures to curb the fur trade and foie gras.

“There are some who see the issue as a matter of personal choice, but no one would extend that principle to things like dog fighting or bear baiting, so it’s not clear why fur farming or force-feeding geese arguably associated with one.” far greater degree of cruelty, should be different.’